While the twice-banned Justin Gatlin headlined the men's line-up in the absence of Jamaican superstar Usain Bolt, the women's competition saw newly-crowned world champion Dafne Schippers see off the challenge of the 'grande dame' of the 200m, American Allyson Felix. 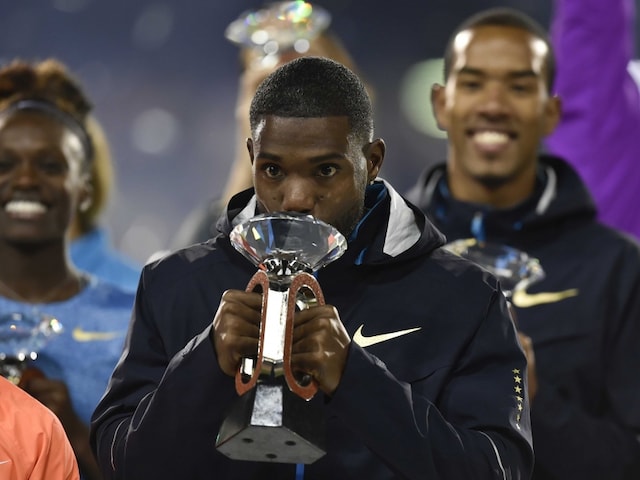 Justin Gatlin kisses his trophy during the IAAF Diamond League meeting at the King Baudouin Stadium in Brussels.© AFP
Brussels:

Justin Gatlin brought his season to a close with a 100m victory at Friday's season-ending Diamond League meet, but the American passed on a shot at a rare double after straining his thigh. (Justin Gatlin Hungry for More After Bittersweet Beijing Worlds)

While the twice-banned Gatlin headlined the men's line-up in the absence of Jamaican superstar Usain Bolt, the women's competition saw newly-crowned world champion Dafne Schippers see off the challenge of the 'grande dame' of the 200m, American Allyson Felix.

Schippers, who has the late Florence Griffith-Joyner's longstanding world record on her radar, clocked 22.12 seconds to beat Felix into second by a tenth of a second.

Felix, the most decorated female athlete in IAAF history who won world 400m gold in Beijing, led coming off the bend, but the 23-year-old Dutch sprinter produced her trademark powerful final 50 metres to outstrip the American. (Gatlin Confident of Beating Bolt in 2016)

"Beating the Olympic champion -- I didn't know that it feels so good," Schippers said of Felix, who has won three world 200m titles and is the reigning Olympic champion, having previously bagged silver at the 2004 and 2008 Games in a sparkling career.

"It makes me especially happy to beat someonee like her. There are few better.

"Nobody is at their best at this stage in the season. Look at the times, but it is a head-to-head duel and it is really important. It is super nice that after a season like this, with two medals, to still be able to do this."

Felix described her second place as "quite logical... because I'm not the sharpest 200m runner at this moment. My switch to the 400m definitely took away some of my speed".

"I just wasn't that sharp today, it wasn't there," the 29-year-old lamented.

"I have been running the 200m this year but it's been quite some time since my last one, so I guess I haven't had that ballistic work."

Gatlin, usually one of the most pleasing sprinters to the eye, laboured to victory in the 100m with a vicious dip on the line to edge out Nigerian-born Qatari Femi Ogunode, who went on to win the 200m in an Asian record of 19.97sec.

In the absence of Bolt, who pushed Gatlin into second place in both the 100 and 200m at the Beijing worlds but withdrew from Brussels to rest after his injury-hit season, the American who has served two doping bans timed 9.98sec.

"Once I felt it, subconsciously I erred on the side of caution and just made sure I dipped for the line."

Turning to his withdrawal from the 200m, Gatlin said: "My coach said 'just don't risk it. You're going in the 200m you're running on the curve so just shut it down'. He doesn't want me worrying about an injury in the off-season."

After his disappointment at the world championships, where he won a third bronze medal, France's Olympic champion and world record holder Renaud Lavillenie claimed a convincing victory in the pole vault.

He cleared a best of 5.95 metres to ensure yet another Diamond League season win in the discipline, an unprecendented feat stretching back to 2010.

In a sad end to what has been one of the season's great battles, Cuban Pedro Pablo Pichardo had to retire early in the men's triple jump, leaving American world champion Christian Taylor to extend his dominance in the event with a winning 17.59m.

Colombian Caterine Ibarguen extended her phenomenal winning stretch in the women's triple jump when she pulled out a sixth and final best of 14.60m to beat Israel's Hanna Knyazheva-Minenko.

Comments
Topics mentioned in this article
Dafne Schippers Athletics
Get the latest Cricket news, check out the India cricket schedule, Cricket live score . Like us on Facebook or follow us on Twitter for more sports updates. You can also download the NDTV Cricket app for Android or iOS.