Rustem Nazarov was disqualified from the Games in Indonesia 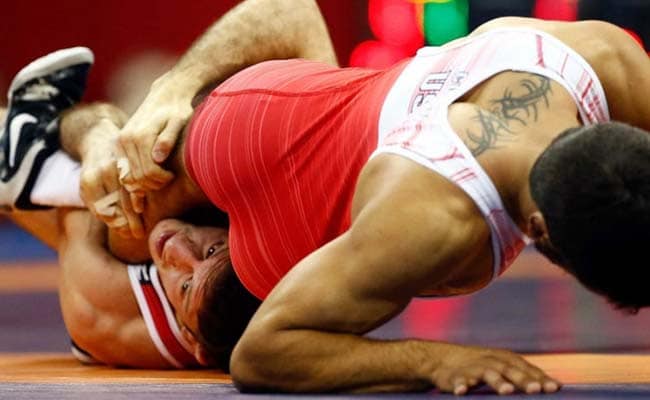 A wrestler from Turkmenistan became the Asian Games' first doping casualty on Friday as Japanese teenage swimmer Rikako Ikee stood on the brink of a historic sixth gold medal. Rustem Nazarov was disqualified from the Games in Indonesia after failing a pre-tournament test for the banned masking agent furosemide, the Olympic Council of Asia said. Nazarov "has been disqualified from the 18th Jakarta-Palembang Asian Games 2018... and his results during the competition held on the 19th August annulled", a statement said. The athlete, 24, had competed in the men's 57kg freestyle event and was defeated in his first match by India's Sandeep Tomar.

Six athletes tested positive at the 2014 Asian Games in Incheon including South Korean swimming star Park Tae-hwan, who was stripped of his medals.

Elsewhere Ikee, 18, topped the 50 metres freestyle heats in Jakarta as she drew closer to becoming the first woman to win six gold medals in any sport at a single Games.

Ikee, who is poised to become the face of the Tokyo 2020 Olympics, swam 25.09 seconds in the morning session and afterwards said: "I just hate losing."

"I'll win through sheer willpower if I have to," she added.

China's Liu Xiang, who set a world record in the 50m backstroke earlier this week, will look to dash Ikee's ambitions after winning her heat in 25.14.

Chinese triple Olympic champion and world-record holder Sun Yang will be the red-hot favourite in the men's 1,500m as he looks for his fourth gold medal on the final night in the pool.

In co-host city Palembang, Indonesia won their first ever rowing gold in the lightweight eight, a victory which crew member Tanzil Hadid dedicated to the newborn baby he is still yet to meet.

Unified Korea, a team of North and South Korean rowers which is testament to warming ties, came fifth in the lightweight men's eight and last in the women's lightweight double sculls.

In cycling, South Korea's Na Ah-reum added the women's time trial to her road race title, becoming the first Games cyclist to do so.

China lead the medals table with 60 golds to Japan's 26 and South Korea's 19 as competition continues on day six.

About 17,000 athletes and officials are taking part in the 18th Asian Games, the biggest sports event in Indonesia's history.

Comments
Topics mentioned in this article
Wrestling Other Sports Asian Games 2018
Get the latest updates on India vs Australia Series, check out the India vs Australia Schedule for 2020-21 and Ind vs Aus live score . Like us on Facebook or follow us on Twitter for more sports updates. You can also download the NDTV Cricket app for Android or iOS.