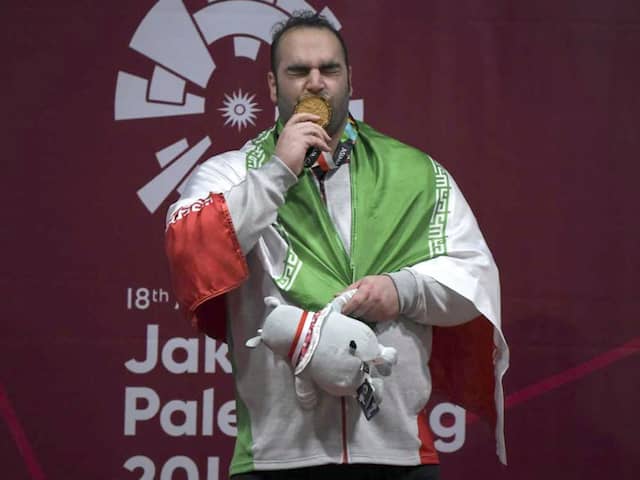 Behdad Salimikordasiabi became only the third weightlifter in history to complete a hat-trick of Asian Games golds Monday after vanquishing doping cheat Saeid Alihosseini in a battle of the Iranian giants. Salimikordasiabi, who won gold at Guangzhou 2010 and Incheon 2014, battled countryman Alihosseini lift-for-lift as they turned the superheavyweight (+105kg) competition into a two-horse race. South Korean superheavyweight Kim Tae-Hyun won gold in 1990, 1994 and 1998 and Iranian great Mohammad Nassiri won lightweight categories in 1966, 1970 and 1974.

"I'm so happy that after Mohammad Nassiri I am only the second man from Iran to win three gold medals in the Asian Games," he told AFP after his winning total of 461kg.

The pair could not be separated after both opened with a snatch of 208kg, but it was Salimikordasiabi who prevailed with his final clean and jerk of 253kg, removing his shoes and belt and kneeling to kiss the stage in thanks.

Alihosseini controversially took silver ahead of Salimikordasiabi in the 2017 world championships in Anaheim, his first competition after returning from an eight-year doping ban.

The 2012 Olympic champion Salimikordasiabi revealed he been hampered by a leg injury that required surgery after last year's world championships.

"After my operation I've had a very bad feeling here," he said pointing to his left knee.

"It had been very hard to train. I don't know how I won. I was determined to do my best. That's why I gave thanks to God."

Alihosseini failed with his final attempt at 254kg on Monday and had to settle for silver on 456kg.

Alihosseini was originally banned for life from weightlifting for repeated positive tests for anabolic steroids. He was reprieved in 2017 when his suspension was changed to 12 and then cut to eight years.

Rustam Djangabaev of Uzbekistan, fourth in last year's world championships, was edged into bronze after a lifetime best clean and jerk of 252kg took him to 455kg, just 1kg adrift of Alihosseini.