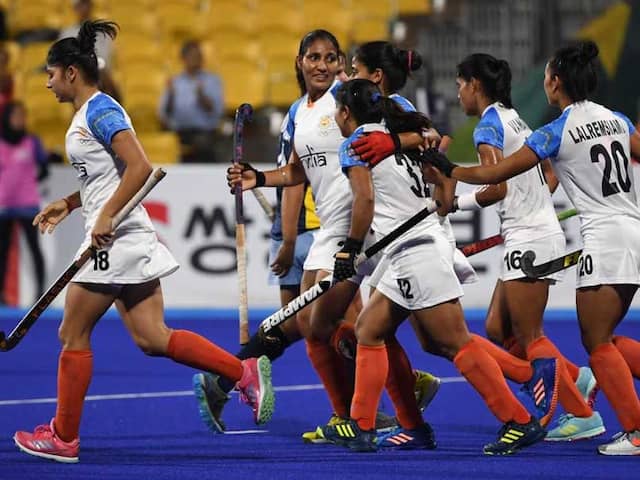 Gurjit Kaur scored the lone goal as India defeated China 1-0 in the women's hockey semi-final at the Asian Games 2018. Gurjit Kaur scored the solo goal through a dragflick which ended way away from the reach of the Chinese goalkeeper in the top corner. The match remained evenly poised in the first three quarters. India began the final quarter on an all-out attack mode constantly piling pressure on China. China, on the other hand gave away plenty of penalty corners and paid their price for failing to clear the ball from their own half. India will face Japan in the women's hockey final match on Friday.

19:53 IST: Rani Rampal plays the ball forward, India are looking to keep the ball. Less than two minutes to play in the final quarter.

19:49 IST: The Indian women continue to pile on pressure. Monika on the attack down the right flank. India are keeping the ball moving inside China's half.

19:39 IST: Free-hit for India, Deepika plays the ball inside the circle from the right flank. China fail to clear the ball from their owl half. India constantly pushing China on the back foot.

19:38 IST: Monika has a shot on the goal, but the ball is deflected off the Chinese keepers thigh pads.

19:37 IST: Rani Rampal on the attack, she does well to move past the Chinese defenders but misses the target.

19:34 IST: Lovely movement from Reena Khokhar, she plays a reverse shot from the edge of the circle, but the ball goes inches wide.

19:30 IST: Brilliant save from the Chinese goalkeeper De Jiaojiao! She dived to her right to keep the well hit shot out. India are piling pressure on Chinese now.

19:26 IST: Brilliant last-ditch tackle from India, to keep China out.

19:23 IST: India are losing possession cheaply. China has got a better tempo in the game but both the sides have defended particularly well to keep it deadlock.

19:20 IST: China on the counter-attack. Sloppy play from them. Monika for India attacks from the right flank. Rani Rampal continues India's attack inside the circle but fails to find the net.

19:18 IST: Long corner for India. The Indian women make a dangerous looking cross from the right flank, but fail to find their target woman inside the circle.

19:17 IST: Gurjit Kaur takes the dragflick, looks like it has hit the foot of the Chinese defender. Video referral taken.

19:15 IST: The third quarter between India and China gets underway. Brilliant start from Rani Rampal, India earn a penalty corner.

19:05 IST: The hooter goes up, it remains India 0-0 China at half-time. China showed more composure in the second quarter, the team also looked better organised. India, on the other hand, got few chances through the counter attacks but failed to convert it.

19:03 IST: Neha Goyal attacks from the right flank, plays the ball inside the circle but fails to find her target. China dribbles the ball out of danger.

19:01 IST: Less than four minutes to play in the second quarter. Navneet Kaur makes a brilliant ball to halt China's progress inside the India's half. India 0-0 China.

19:00 IST: Gurjit plays the ball wide, changes flank for India. But the Indian fail to find space and penetrate through the formidable Chinese defense.

18:55 IST: Green card for Neha Goyal. India look to attack from Rani Rampal but the skipper was stopped in her strides by the Chinese defense. It's still deadlock!

18:54 IST: China sends the penalty corner wide. Still deadlock in the semi-finals but China looking the sharper in the second quarter. They have organised themselves well.

18:52 IST: Penalty corner for China, early in the second quarter. Indian goalkeeper Savita did well to keep the ball away from finding the net.

18:44 IST: Ll Hong from China, looks to have hurt herself. Not so serious, the team physio has a look and the match continues.

18:42 IST: As we close in to the end of first quarter, India have pushed China on the back foot. China, have intercepted the incoming balls inside the circle well, to keep India away from scoring. Less than 3 minutes to play in the first quarter.

Hockey India congratulates Navneet Kaur, forward of the Indian Eves, on completing her 50 international matches during their Semi-Final clash with China at the @asiangames2018 on 29th August 2018.#IndiaKaGame #AsianGames2018 pic.twitter.com/ptfMnfLGjg

18:38 IST: First penalty corner for India, goes wide. The Chinese defender did well to come in the way of the ball to keep it out.

18:35 IST: India initiate the first real attack from the left wing, cleared away by the Chinese defense.

18:32 IST: A tight midfield battle on display between India and China. China, however looks the more attacking side out of the two. India have made a cautious start.

18:30 IST: China gets the first quarter underway. The Chinese look to initiate a straight forward attack, but the ball has been well intercepted by the Indian defender.

18:29 IST: Rani Rampal has not been included in the starting eleven.

18:28 IST: National anthems have been sung. Both the teams have greeted each other with a hand shake. The players are now taking up their positions on the field.

18:23 IST: Here is the Indian women's team starting XI for the semi-final tie against China.

Here is the Starting XI of the Indian Women's Hockey Team who will play their Semi-Final match at the @asiangames2018 against China at 6:30 PM (IST) on 29th August. Watch the action LIVE on @SPNSportsIndia and Sony https://t.co/pNVBVrwJlG.#IndiaKaGame #AsianGames2018 #INDvCHN pic.twitter.com/gaq91Zj8fA

18:15 IST: We are minutes away from the match to get underway.

17:20 IST: China had clinched a silver medal at the Asian Games 2014. China have earned 7 medals from the Asiad so far.

17:10 IST: India had won all their matches to top Pool A. China won 2, tied one and lost one in their pool stage matches.

17:00 IST: Hello and welcome to the live commentary from the Asian Games 2018 women's semi-finals hockey match between India and China

India won themselves their first PC in the same minute, but the resulting shot from Deep Grace Ekka was saved by a Thai defender.

The remaining minutes of the quarter saw both the teams battle for possession in midfield, with India creating a few opportunities, however the World No. 9 team lacked the intensity and precision in their play.

Thailand seemed content on defending as a unit and not allow the Indians any room as the scores remained 0-0 at the end of the first quarter.

India had a couple of chances in the opening minutes of the second quarter as Rani took another shot which went wide, while fellow striker Vandana Katariya was denied a shooting chance by the Thai Goalkeeper Alisa Narueangram as she cleared the ball away as the Indian was about to take a shot.

Rani was involved again in the 23rd minute as she made her way into the striking circle, wriggling past four Thai defenders and fired a ball across goal, but young striker Lalremsiami could not get her stick at the end of the pass as the scores remained 0-0.

Comments
Topics mentioned in this article
Other Sports Hockey Live Blogs Asian Games 2018
Get the latest Cricket news, check out the India cricket schedule, Cricket live score . Like us on Facebook or follow us on Twitter for more sports updates. You can also download the NDTV Cricket app for Android or iOS.