Vinesh Phogat adds to the names of cousins Geeta and Babita, whose careers were highlighted in the Bollywood hit 'Dangal'. 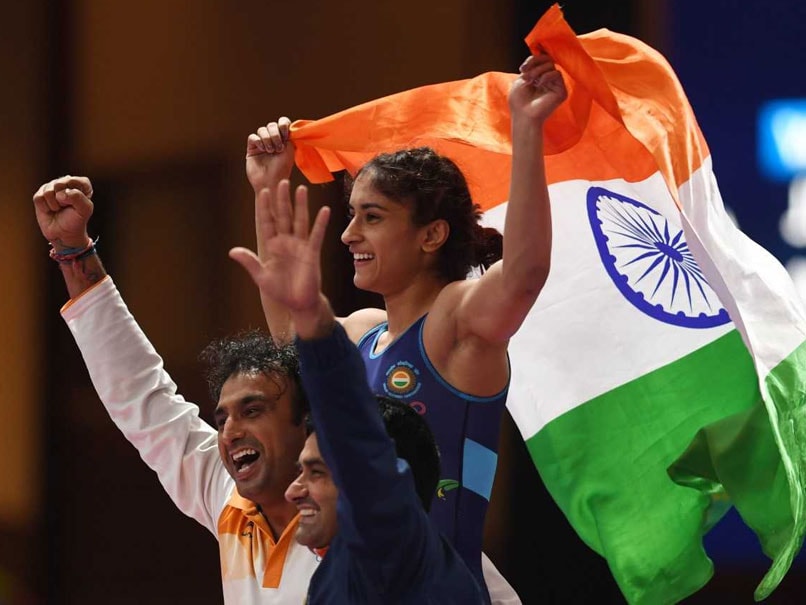 Vinesh Phogat added a famous gold medal to India's Asian Games 2018 kitty in a splendid recovery from a potentially career-ending injury during the Rio de Janeiro Olympics, where she had to be carried off the mat in tears. Vinesh Phogat also added to the family credentials, as her cousins are already stars in India after their careers were highlighted in the Bollywood hit, "Dangal'. Vinesh Phogat became India's first women's wrestling champion at the Asian Games on Monday.

Vinesh Phogat outclassed Japan's Yuki Irie 6-2 to win the 50kg final in Jakarta and was then hoisted on the shoulders of team staff draped in the Indian flag.

The 23-year-old is a cousin of former Commonwealth champions Geeta and Babita Phogat, whose rise from obscurity to wrestling fame was captured in 2016's 'Dangal', an international hit.

"I had targeted gold. I had three-four silvers at the Asia level. My body responded well, I had trained well and God was being kind," Vinesh told reporters.

"I am rough and tough and a risk-taker. I take risks in life and they pay off. I have lot of self-belief that there is nothing that I can't do," she said.

The omens were good for the 2014 bronze medallist when she began the competition with a win over China's Sun Yanan, against whom she had suffered a leg injury at the 2016 Olympics.

"Injuries are a part of a sportsperson's life. And I have heard somewhere that injuries only strengthens an athlete. I have come back stronger from that Rio heartache," Vinesh beamed.

"There was pressure but it was to prove that I am actually stronger than her (Sun). I wanted to prove this today because I lost thrice to her before," she added.

She initially trained under her uncle Mahavir Singh Phogat, who coached his daughters Geeta and Babita, but said she idolises India's two-time Olympic medallist Sushil Kumar.

"I listen to Sushilji a lot. Whatever he suggests, I take note," she said. Sushil Kumar, who lost his opening bout in the 74kg category on Sunday.

"In 2014 when I won bronze in Incheon he said, don't worry, whatever happens, happens for good. Maybe you have something bigger in store," she said.

The rest of the Indian women fell by the wayside on Monday, including Olympic medallist Sakshi Malik who lost her 62kg bronze 2-12 to Rim Jong Sim of North Korea.

Comments
Topics mentioned in this article
Wrestling Other Sports Asian Games 2018
Get the latest updates on ICC T20 Worldcup 2022 and CWG 2022 check out the Schedule, Live Score and Medals Tally. Like us on Facebook or follow us on Twitter for more sports updates. You can also download the NDTV Cricket app for Android or iOS.