Nearly every able-bodied South Korean male is required to perform 21 months of military service before the age of 28, although the government rewards Asian Games gold medals and Olympic medals of any colour with an exemption. 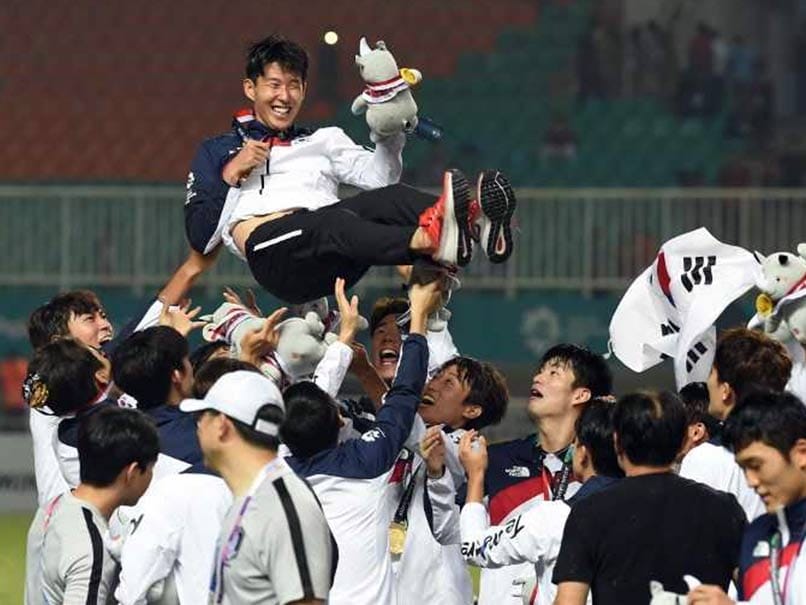 Son Heung-min will rejoin his Tottenham Hotspur teammates next week buzzing after his emotional rollercoaster ride at the Asian Games in Jakarta. The decision by Spurs to release Son for a far-flung, under-23 tournament already looks like a shrewd piece of business after he led South Korea to a gold medal that spares him a career-threatening stint of military service. One of three permitted over-age players in the Korean squad, the 26-year-old forward recently signed a new five-year deal with the London club and was quick to thank Spurs manager Mauricio Pochettino after a 2-1 extra-time win over Japan on Saturday.

"I'm so grateful to Tottenham because they let me come here," Son told AFP, clutching his gold medal and grinning from ear to ear.

"Normally that's not an easy decision. I would have felt very sorry if I didn't win the gold medal," he added, after escaping almost two years of compulsory military service.

"I really want to say thank you to the coach, the players and fans of Spurs. They are so special."

Son's plight has captured the hearts of Spurs fans, who have taken to social media in their thousands to wish the player luck in Indonesia.

Nearly every able-bodied South Korean male is required to perform 21 months of military service before the age of 28, although the government rewards Asian Games gold medals and Olympic medals of any colour with an exemption.

"I'm so grateful for all the support," said Son, who will have missed at least three games at the start of the Premier League season to play the Asian Games.

"It means a lot to me. Now I'm looking forward to getting back to England and showing what I can do. I'll continue to work hard for Tottenham."

- Tears of joy -
Hugely popular at Spurs, Son joked before the final that he was upset team-mates Harry Kane and Dele Alli hadn't texted.

With the weight of the world lifted from his shoulders after overcoming Japan, he revealed that he was still waiting.

"Not yet, but it doesn't matter -- I know they're focused on the Premier League so no worries," smiled Son.

"The coaching staff from Tottenham have been watching me. I hope this makes them happy. It's the best present for my life."

Goals from Lee Seung-woo and Hwang Hee-chan in sweltering West Java will allow the South Korea pin-up to see out his new contract in London, although a late header from Ayase Ueda meant the defending champions had to survive a heart-stopping last few minutes.

Son, substituted in the dying seconds, sprinted from the bench to embrace World Cup goalkeeper Jo Hyeon-woo, sobbing tears of joy as they rolled on the turf together.

"I've got the gold medal around my neck but it really belongs to the Korean people," he said. "Without them we couldn't win this tournament."

Son's former club Bayer Leverkusen refused to release him for the 2014 Asian Games when the Koreans also scooped gold.

His tears after South Korea's quarter-final defeat by Honduras at the 2016 Rio Olympics moved a nation, and thousands offered to do double their own military service in an online petition if Son could be pardoned.

After his ordeal was finally over, the World Cup star complained his chunky winner's medal was "heavy".

But it was worth more than its weight in gold to him, his Korean team-mates -- and perhaps to Spurs.

"We were a hungry bunch of guys and that hunger got us through," said Son. "It's the best day in my life!"

Son Heungmin Football Asian Games 2018
Get the latest updates on ICC T20 Worldcup 2022 and CWG 2022 check out the Schedule, Live Score and Medals Tally. Like us on Facebook or follow us on Twitter for more sports updates. You can also download the NDTV Cricket app for Android or iOS.