Japan's Rikako Ikee is the first woman to win the Most Valuable Player award. 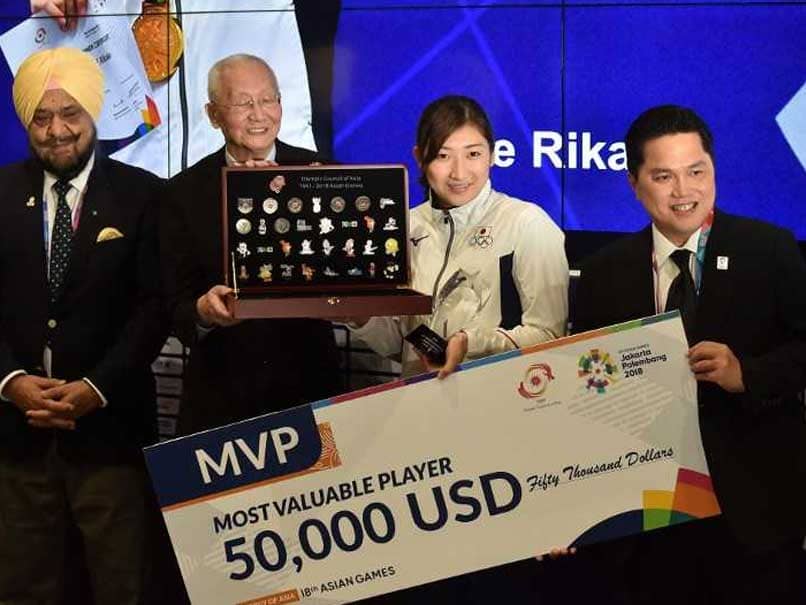 Rikako Ikee (2nd R) was named Most Valuable Player at an awards ceremony for the 18th Asian Games.© AFP

Teenage swimming sensation Rikako Ikee said she would celebrate with barbecued beef and sushi as she was named the best athlete at the Asian Games on Sunday. Rikako, 18, who grabbed a record six gold medals in Jakarta, said she hoped she had put Japanese swimming on the map ahead of the Tokyo 2020 Olympics. "I'm looking forward to eating some barbecued beef and sushi," said Rikako, the first woman to win the Most Valuable Player award. "To become the first Japanese to win six golds... it has put Japanese swimming on the map," she added on the final day of the regional Olympics.

Rikako is the first woman to win six golds at a single Games, and she finished with eight medals in total -- equalling the record set by North Korean shooter So Gin Man in 1982.

Next up for Rikako, set to be the face of the 2020 Olympics in her home city, is an attempt at her first world title next year in South Korea.

"I still haven't won a world title so that's my next goal," she said, adding that she was already back in Japan when she was told she'd won MVP.

"I was on the train to Disneyland when my coach called to tell me it might be me and I couldn't stop grinning," she said.

"Hasn't quite sunk in but it's something I wanted to win so to win the award is a real honour."

Comments
Topics mentioned in this article
Other Sports Asian Games 2018
Get the latest updates on India vs England Series, India vs England , live score and IPL 2021 Auction . Like us on Facebook or follow us on Twitter for more sports updates. You can also download the NDTV Cricket app for Android or iOS.