Bangladesh to host Asia Cup in 2014

Bangladesh had hosted the last edition of the Asia Cup in 2012. 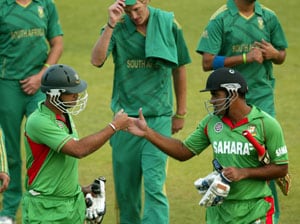 The Asia Cup cricket tournament will be held in Bangladesh for the second time in a row after India, who had earlier agreed to host the 2014 edition, backed out citing a packed international schedule.

Bangladesh had hosted the last edition of the tournament in 2012.

The likely dates for the tournament will be February 24 to March 8.

The decision was taken at the Asian Cricket Council (ACC) board meeting on April 8 in Kuala Lumpur, according to a report in 'ESPNcricinfo'.

It is said that India informed the other ACC members that they were trying to finalise the itinerary for the New Zealand tour, scheduled to be held in February-March next year.

But Bangladesh, in order to host the tournament, is learnt to have agreed to postpone a scheduled tri-series involving Sri Lanka and Pakistan around the same time.

There is a possibility that the dates could be changed again as the BCCI have been trying to convince New Zealand Cricket for two Tests, two ODIs and two T20Is, which will enable India to compete in the Asia Cup .

Comments
Topics mentioned in this article
Asia Cup 2014 Cricket Pakistan Cricket Team New Zealand Cricket Team Bangladesh Cricket Team
Get the latest updates on ICC T20 Worldcup 2022 and CWG 2022 check out the Schedule, Live Score and Medals Tally. Like us on Facebook or follow us on Twitter for more sports updates. You can also download the NDTV Cricket app for Android or iOS.