Bangladesh, as an Asia Cup cricket venue, was proposed by Pakistan. This will be the first time that the tournament will be a Twenty20 affair. 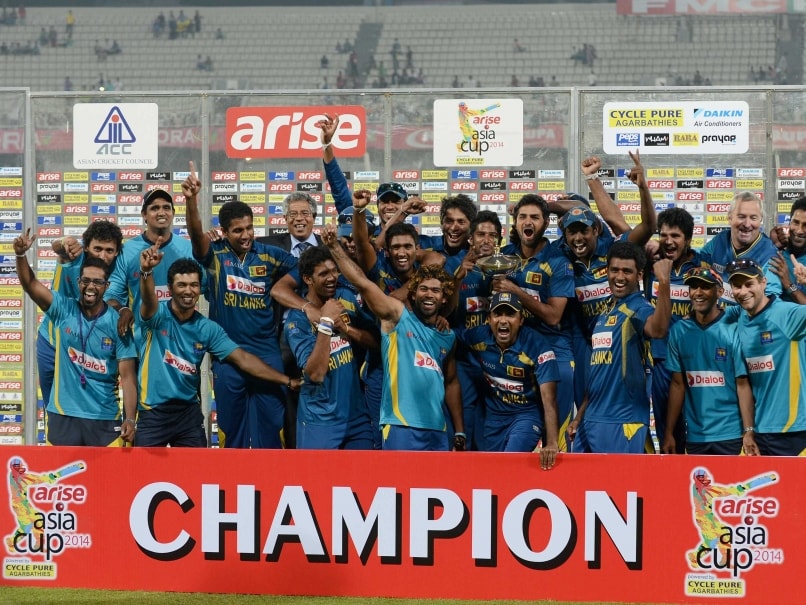 Sri Lanka had won the Asia Cup in 2014 by defeating Pakistan in the final.© AFP

The Asia Cup for cricket will serve as a warm-up event for the ICC World twenty20 in India next year. Bangladesh will host the Asia Cup for the third consecutive time from February 24. The final will be played on March 6, exactly five days before the World Cup will begin. (Asia Cup 2016 to be Played in T20 Format)

Member nations promptly accepted Bangladesh as a venue after Pakistan proposed their name in a meeting in Singapore on Tuesday. Asia Cup has often been marred by boycotts and pullouts and generally reflected the political climate prevailing mainly in the Indian sub-continent.

This will be the fifth time Bangladesh will host the event after staging it for the first time in 1988. The first Asia Cup, started as a biennial event, was first played in 1986. Sri Lanka and India have won the Asia Cup five teams each while Pakistan were victorious twice.

Sri Lanka will defend their title they won in Mirpur in 2014. The Lankans had defeated Pakistan by five wickets. India and hosts Bangladesh will be the other Test-playing nations.

The fifth team in the competition will be an Associate country. Afghanistan, Oman, Hong Kong and the UAE will play a qualifying tournament in November to complete the line-up. UAE will host the qualifiers.

The Asia Cup has primarily been a ODI event but this will be the first time, the tournament will turn Twenty 20 to facilitate preparation for the T20 World Cup. However, the 2018 event will return to the standard ODI format because of the 50-over World Cup in 2019 in England.

Comments
Topics mentioned in this article
Sri Lanka Cricket Team India Cricket Team Pakistan Cricket Team Asia Cup 2014 Bangladesh Cricket Team Cricket
Get the latest updates on ICC T20 Worldcup 2022 and CWG 2022 check out the Schedule, Live Score and Medals Tally. Like us on Facebook or follow us on Twitter for more sports updates. You can also download the NDTV Cricket app for Android or iOS.