Bangladesh were as good as Australia: Shahid Afridi

Pakistan's flamboyant allrounder Shahid Afridi paid rich tributes to Bangladesh, which lost by just two runs to his team in the Asia Cup finals, saying the minnows were as good as the mighty Australians in the clash. 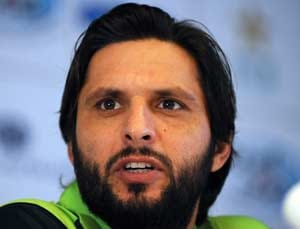 Pakistan's flamboyant allrounder Shahid Afridi paid rich tributes to Bangladesh, which lost by just two runs to his team in the Asia Cup finals, saying the minnows were as good as the mighty Australians in the clash.

"It seemed as if we were playing against Australia in the final. Bangladesh have matured a lot as a team and it felt good to win such a hard final," Afridi told reporters after reaching his hometown last night from Dhaka.

Mohammad Hafeez, Younis Khan, Saeed Ajmal, Sarfraz Ahmed and Asad Shafiq were the other members of the victorious Pakistan team to return from Dhaka.

Speaking loudly to make his voice audible to the media as hundreds of people gathered at the Karachi airport to give a warm welcome to their heroes, Afridi said Pakistan may have won the final but still needed to improve in many areas.

"We need improvement in some areas and we need to produce more players. I would urge the cricket authorities to lay lot of stress on our domestic cricket and implement a 10-year plan so that we can get maximum number of quality players," Afridi said.

The players were greeted by loud slogans and fans dancing to fast beats at the airport. Other members of the team will reach Lahore today.

Afridi said he was impressed by the performance put up by Bangladesh and felt the Bangladesh Premier League had helped them a lot.

"I think by holding the BPL they did well and their players fought hard. I think we also need to make our domestic cricket as competitive as possible. We can look at the examples of the IPL and BPL while counting the benefits of such events," Afridi said.

Afridi said he felt happy that whenever he produced good bowling spells, the team did well.

"It feels good that whenever I bowl well we tend to win matches. I was struggling before the final and I worked hard in the nets so I am happy I could perform in the final and win the man of the match award," he said.

Afridi said it was up to the selectors to decide if there was need for changes in the team for one-day internationals and Twenty20 matches.

"T20 cricket is a totally different format of the game but yes I think that when players like Ahmed Shahzad, Nasir Jamshed and others have done well they should be given chances in T20 cricket," he said.

Asked if he would be ready to captain the side again if the board offered him the job for ODIs and T20s, Afridi at first ignored the question and than walked away after thanking the media.

Comments
Topics mentioned in this article
Cricket Bangladesh Cricket Team Asia Cup 2012 Shahid Afridi
Get the latest updates on IPL 2021, IPL Points Table , IPL Schedule 2021 , live score . Like us on Facebook or follow us on Twitter for more sports updates. You can also download the NDTV Cricket app for Android or iOS.