Bangladesh out-played Sri Lanka in every department of the game on Tuesday to win the 6th ODI of Asia Cup on Tuesday by 5 wickets. A look at the statistical highlights of the match that ensured a title shot for Mushfiqur Rahim and his team. 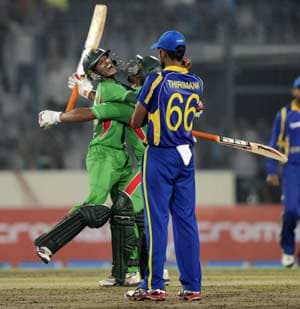 Bangladesh out-played Sri Lanka in every department of the game on Tuesday to win the 6th ODI of Asia Cup on Tuesday by 5 wickets. A look at the statistical highlights of the match that ensured a title shot for Mushfiqur Rahim and his team.

# Chamara Kapugedera (62 off 92 balls) has posted his fourth fifty at the Asia Cup - two each against India and Bangladesh.

# Kapugedera's eighth fifty in ODIs is his second against Bangladesh.

# Kapugedera's 62 is his first fifty in eight innings in Bangladesh in ODIs.

# Kapugedera has completed his 1,000 runs in ODIs in the subcontinent, aggregating 1027 at an average of 22.82 in 58 matches, including six fifties.

# Lahiru Thirimanne (48) has posted his highest innings at the Asia Cup, surpassing the 29 against India at Mirpur on March 13, 2012

# Thirimanne and Kapugedera have shared a fourth wicket stand of 88 - Sri Lanka's third highest against Bangladesh at the Asia Cup - the highest is 139 between Aravinda de Silva and Arjuna Ranatunga at Kolkata on December 31,1990.

# Kumar Sangakkara has aggregated 142 in three matches at an average of 47.33, including two fifties.Â  His aggregate is the highest by a Sri Lankan in the present competition.

# Upul Tharanga (48) has completed his 2,000 runs under Mahela Jayawardene's captaincy - 2007 runs at an average of 30.87 in 70 matches, including four centuries and eleven fifties.

# Sachithra Senanayake (19 not out) has recorded his second highest in ODIs - the highest is 22 not out against India at Adelaide on February 14, 2012.

# For the first time, Sri lanka have lost all the games played in an Asia Cup tournament.Â  They have achieved another first in the Asia Cup, losing four matches in a row - by 81 runs to India at Dambulla on June 24, 2010 followed by three in the present competition.Â

# Bangladesh, with their five-wicket win over Sri Lanka, have qualified for the Asia Cup final for the first time.

# Bangladesh's only previous appearance in a Grand Final was against Sri Lanka in the Three Nations Trophy at Mirpur on January 16, 2009, losing by two wickets.

# Tamim Iqbal has batted brilliantly in the present competition, recording 64 against Pakistan, 70 against India and 59 against Sri Lanka.

# Tamim's record in the Asia Cup is magnificent, totalling 457 at an average of 41.54 in eleven matches.Â  His tally includes five fifties.

# Nuwan Kulasekara (2/30) has recorded his best bowling performance at the Asia Cup, obliterating the 2 for 35 against Pakistan at Karachi on June 29, 2008.

# Shakib's second half-century at the Asia Cup is his 24th in ODIs - his third against Sri Lanka.

# Mahmudullah and Nasir Hossain were involved in a stand of 77 (unbroken) for the sixth wicket - Bangladesh's second highest against Sri Lanka, next only to the 95 between Mahmudullah and Mohammad Ashraful at Dhaka on January 4, 2010.

# Sachithra Senanayake (2/38) has recorded best bowling figures in ODIs, eclipsing the 2 for 45 against Australia at Perth on February 10, 2012.

# Shakib Al Hasan has received his 13th Man of the Match award in ODIs - his second against Sri Lanka.