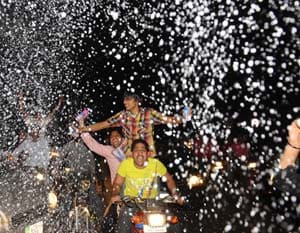 Police raided a house in the Defence area of Lahore and arrested six bookies, including Dilip Kumar and Anil Kumar, and seized 60 telephones, four LCD televisions and books with details of the bets, spokesman Niyab Haider said.

Anil Kumar told police that the bookies had received bets worth Rs 6 million on final match of the Asia Cup.

A case was registered against the accused, Haider said. A bookie was shot dead by unidentified gunmen in Lahore after the match between India and Pakistan on March 18.

Comments
Topics mentioned in this article
Cricket Bangladesh Cricket Team Asia Cup 2012
Get the latest updates on India vs Australia Series, check out the India vs Australia Schedule for 2020-21 and Ind vs Aus live score . Like us on Facebook or follow us on Twitter for more sports updates. You can also download the NDTV Cricket app for Android or iOS.