Pakistan batsman Younis Khan said that Bangladesh deserved a spot in the Asia Cup final just before the showdown between the two nations.. 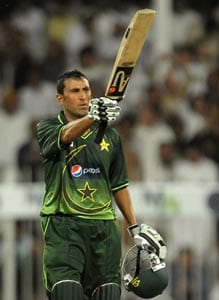 Since the end of the World Cup, Pakistan are the only one among the four Asian Test nations to have a record to be proud of. India had their disasters in England and Australia, Sri Lanka haven't won a series of note in a year, and Bangladesh faced the ignominy of losing to Zimbabwe. Pakistan, meanwhile, were winning nearly everything they played.

It has been a year in which they have moved away from their traditional fast-bowling dominated attack to one in which spinners are the bigger threats, a year in which pragmatic batting has become more and more common instead of the pyrotechnics of earlier. At the end of a success-filled season, they also get the chance to change their pedestrian record in the Asia Cup, which they have only won once despite decades of trying.

The only team standing in their way is Bangladesh, who have beaten them only once, back in the 1999 World Cup. This Bangladesh side, though, aren't like the also-rans of the past. Showing a resilience that was missing in the past, and starting to shed an over-reliance on a couple of star players, Bangladesh have claimed big scalps in India and Sri Lanka this tournament, and nearly beat Pakistan as well.

Younis Khan said Bangladesh deserved a spot in the final. "They have improved a lot," he said. "They have some aggressiveness in their body language and that helps to bring about positive results. That is the way an international team should play."

Shakib Al Hasan, Bangladesh's best player over the past few years, was the Man of the Match in both of Bangladesh's victories. Those successes came only because even after Shakib was dismissed the other batsmen didn't fold and nervelessly took the side past the finish line.

"They play good as a group, not individually," Younis said. "If you see the last two games when they won against India and Sri Lanka, they performed as a group. All the bowlers, all the batsmen and all the fielders, they put in their 100%. This is the key thing about their performance."

One thing that has helped Bangladesh is that they have chased in every match of the tournament. Mahela Jayawardene had jokingly suggested the captains should practise tossing coins, as the Mirpur track has generally favoured the team batting second in this tournament. India completed their highest successful chase in ODIs, against Pakistan on Sunday, while Bangladesh have also been solid in hunting down totals. "The management will think of something, maybe we will chase tomorrow," Younis said. "But Bangladesh are good chasers, this is their plus point."

Unusually, Pakistan are the team that has made the least headlines this tournament. Bangladesh's heroics, Sachin Tendulkar's 100th 100, Virat Kohli's masterful 183 and Sri Lanka's listless performance have been discussed threadbare while Pakistan have managed to generally stay under the radar. Tomorrow, they will be hoping to feature in the headline that matters.