Still disappointed at missing a final against arch-rival India, Pakistan fans had nothing but praise for Bangladesh's performance in a thrilling Asia Cup cricket final. 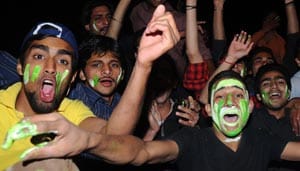 Still disappointed at missing a final against arch-rival India, Pakistan fans had nothing but praise for Bangladesh's performance in a thrilling Asia Cup cricket final.

While most still wished the victory came against India, they were filled with admiration for the Bangladesh team that came agonizingly close to winning the title.

India defeated Pakistan by six wickets in a high-scoring league match, but Bangladesh qualified for the final after beating both India and Sri Lanka.

"I was praying for an India-Pakistan rematch, but Bangladesh played like a real contender for the title," said Juzer Mustafa, a university student. "I missed India a lot in the final because it would have given us a chance to beat the current world champions."

Despite India's absence from the final, people in Pakistan - especially youngsters - had made special arrangements to watch the final on big screens.

The fans were tense when Bangladesh made a late charge through Mashrafe Mortaza and Mamudullah as the target was reduced to nine runs in the last over.

The moment Cheema bowled the last delivery, the silence broke into jubilation with fans waving national flags while riding their motorbikes and cars on the main streets of the cities.

"Until the last over we were thinking Bangladesh can win the match, but thanks God Pakistan won," said Sonia Abbasi, a student who came to watch the match with her friends on a giant screen in a food street in Karachi.

The Bangladesh players couldn't hide their emotions after losing a tense final as captain Mushfiqur Rahim and former skipper Shakibul Hasan were seen to burst into tears on the field during the trophy presentation.

Pakistan last won the Asia Cup in Bangladesh 12 years ago - the same year when Bangladesh was awarded test status.

Bangladesh was never rated close to the other three Asian teams - India, Pakistan and Sri Lanka - before this year's tournament. But Bangladesh proved that it won't be just making up the numbers in the tournament after fighting back from an opening 21-run loss to Pakistan.

"Bangladesh deserved to win yesterday because they played really well - not only in the final but also against India and Sri Lanka in the league matches," said Naseer Ahmad, computer operator.

"I would have enjoyed more had we defeated India in the final."

Opening batsman Tamim Iqbal posted four successive half centuries in the tournament to prove his own cricket board wrong when he was first omitted from the squad before being reincluded when the country's chief selector resigned in protest.

Middle order batsman Nasir Hossain, allrounder Hasan and Rahim formed the nucleus of the batting in two successful run chases against India and Sri Lanka which booked their berth in the final.

Pakistan's strong bowling attack was shredded by India's Virat Kohli when he made 183 as India chased down 330-run target in their league match.

But India's hopes of a final against Pakistan were shut down by Bangladesh when the hosts crafted a clinical five-wicket win against Sri Lanka in a rain-reduced final league match.

Bangladesh had ticked all the boxes in the final until that last over of Shahadat Hossain, when Pakistan accumulated 19 runs that lifted its total to 236-8.

"Bangladesh is like a younger brother to us, they played well throughout the tournament and I would not have mind had Pakistan lost the final yesterday," said Saifullah Khan, who works as a driver.

"I don't like Pakistan losing to India, and after they defeated us in the league match, I had hoped we would take revenge from them in the final."