Bangladesh, the country, is weeping. Not to forget the 11 brave men who nearly pulled off a momentous win over Pakistan in the final of the Asia Cup here yesterday. After the game, scores of despairing spectators refused to leave the ground. 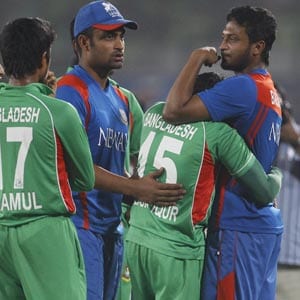 Bangladesh, the country, is weeping. Not to forget the 11 brave men who nearly pulled off a momentous win over Pakistan in the final of the Asia Cup here yesterday. After the game, scores of despairing spectators refused to leave the ground.

Bangladesh skipper Mushfiqur Rahim had to hide his tears behind the chest of Shakib Al Hasan. Even journalists in the press centre shed a tear. These were scenes of despair. (Also Read: Bangladesh win hearts as Pakistan crowned Asia Cup champions)

A depressed Sheikh Hasina, Bangladesh's Prime Minister, was seen sitting alone in the VIP corner. She realised that while the whole nation was preparing to rejoice a historic victory, a bowler by the name of Aizaz Cheema shattered their dreams.

The emotion that Bangladesh felt yesterday night will help them in the long run. If anything, they will be determined to permanently shed the tag of 'minnows'.

Rahim said that the tournament that saw them beat heavyweights India and Sri Lanka will help them become more competitive. "Shakib getting out at that stage was the turning point. But, this is just the beginning for us.

"This tournament will help us make a big impact in international cricket. People will take us seriously now," he said.Â  Pakistan captain Misbah-ul-Haq congratulated Bangladesh. "The young lads of Bangladesh gave us a tough and torrid time. We were in trouble, no doubt about that. Any result was possible until the last over.

But, thanks to Cheema, who really bowled in such a fashion that the batsmen didn't get any room to swing their bats. Cheema was our star tonight," he said in the post-match media briefing.

Man of the match Shahid Afridi was glad to regain his rhythm: "In the last 4-5 games, I wasn't bowling well. I started working in the nets, and finally I got the results. But, I must congratulate Bangladesh for playing awesome cricket. They can be proud losers."

Meanwhile, India's Virat Kohli was given an award for finishing the tournament as the highest run-getter.Â  Shakib Al Hasan was declared the man of the tournament.

Comments
Topics mentioned in this article
Cricket Asia Cup 2012 Mushfiqur Rahim Shakib Al Hasan Bangladesh Cricket Team
Get the latest updates on India vs Australia Series, check out the India vs Australia Schedule for 2020-21 and Ind vs Aus live score . Like us on Facebook or follow us on Twitter for more sports updates. You can also download the NDTV Cricket app for Android or iOS.