Sabine Lisicki and Marion Bartoli clash for the Wimbledon title on Saturday having conquered a series of personal demons both on and off the court. 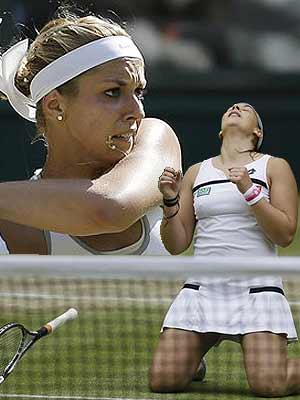 Sabine Lisicki and Marion Bartoli clash for the Wimbledon title on Saturday having conquered a series of personal demons both on and off the court.

When Lisicki walks onto Centre Court for her first Grand Slam final it will be both the culmination of a childhood dream and also a fitting end to a tale of redemption that started three years ago.

The 23-year-old German's joyful celebration at the conclusion of Thursday's dramatic win over Agnieszka Radwanska was a far cry from the dark days of 2010 when she was on crutches for months after sustaining a serious left ankle injury at Indian Wells.

Unable to walk and with her promising tennis career in the balance, Lisicki was at a crossroads.

But she refused to bow to suggestions that it might be better to leave tennis rather than risk further damage to her body.

And after five months of rehabilitation, she was finally able to return to action.

Even then the journey back to top had to be taken one step at a time.

But later that year she reached the Wimbledon semi-finals as a wildcard and hasn't looked back since.

Beating French 15th seed Bartoli in a battle of two players both looking for their first Grand Slam title would be the icing on the cake for Lisicki, who has become the darling of the Centre Court with her beaming smile and all-action play.

"I always believed. Always. No matter what happened. I can still remember when the doctor told me that I have to be on crutches the next six weeks," Lisicki said.

"That period made me such a much stronger person and player. I know anything is possible after learning how to walk again.

"I love the sport so much and I miss it when I cannot be out there on the court. It just gives me the belief to overcome anything."

Lisicki's tale of triumph in adversity carries extra resonance at Wimbledon, where her compatriot Steffi Graf enjoyed so many great days and who was the last German champion in 1996.

Lisicki, however, has come under fire from some rivals who claim she regularly exaggerates her back-story as well as overdoing the smiles and tears on court.

"That's just myself. I enjoy myself out there. Why shouldn't I show it?," she said.

"I'm an emotional person. It helps me stay relaxed and to enjoy the game and play my best tennis. I won't change anything."

History favours Lisicki, who has won three of her four meetings with Bartoli.

But Bartoli has experience of the Wimbledon final after being beaten by Venus Williams in 2007.

She has rediscovered her best form since ditching her father Walter, who was her long-time coach, and hiring former Wimbledon winner Amelie Mauresmo.

"If you compare the speed of my shots, the way I'm moving, I'm just doing everything better than six years ago," Bartoli said.

"I've been growing up. I've been having some tough times, but I've always been able to bounce back, practice hard and believe in myself.

"I felt like those kind of attitudes should be rewarded at some point and they were this year."

Also on Saturday, Bob and Mike Bryan face Ivan Dodig and Marcelo Melo in the men's doubles final looking to become the first team to hold all four Grand Slam doubles titles at the same time.

The brothers are also bidding to complete a 'Golden Bryan Slam' having also won the gold medal at the 2012 Olympics.