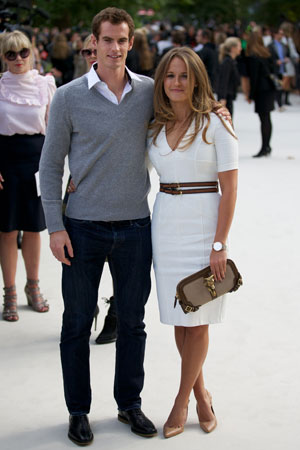 Since his debut at Wimbledon in 2005, Andy Murray has had two women in his corner, cheering and supporting his every move. One is Judy - his mother and source of inspiration and the other is Kim Sears - his girlfriend for over eight years.

Kim is the daughter of tennis coach Nigel Sears and it has been reported that she met Murray via tennis connections in their native Britain.

"One thing that, I think, really helps with her is that she really understands the sport because she has been around it from a young age," Murray was quoted as saying by The Mirror.

Except for a short break in their relationship, Murray and Sears have been going strong and the couple have even moved in together.

"She was used to her dad travelling on the Tour when she was a kid so she knew what it was like to have that sort of distant relationship and that's obviously helped a lot," added the two-time Grand Slam champion.

Murray achieved his greatest victory on Sunday night when he surpassed World No.1 Novak Djokovic in straight-sets to be crowned the men's singles champion at the All England Club. (Also read: Murray restores British rule)

Yet, despite being on an unimaginable high, Murray was rather perturbed by a question asked to him during the post-match press conference.

A journalist asked him whether he was going to propose to Sears and 'settle down'. "No, I haven't thought about that," Murray replied, while shooting a riled look to the journalist.

Though he batted away questions about Sears at the press conference, it is likely to fuel rumours of an imminent engagement.

Comments
Topics mentioned in this article
Tennis Wimbledon 2011 Wimbledon 2013 Leander Paes Andy Roddick Aisam-Ul-Haq Qureshi Maria Sharapova Andy Murray Lukas Dlouhy Rohan Bopanna Novak Djokovic
Get the latest updates on IPL Auction 2023 and check out  IPL 2023 and Live Cricket Score. Like us on Facebook or follow us on Twitter for more sports updates. You can also download the NDTV Cricket app for Android or iOS.