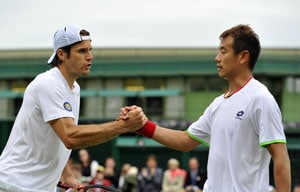 German veteran Tommy Haas ended Jimmy Wang's hopes of a first Grand Slam third round appearance as the Taiwanese qualifier was crushed 6-3, 6-2, 7-5 at Wimbledon on Friday.

Wang, the world number 151, had never been past the second round at a Grand Slam and was bidding to become just the second man from Taiwan to reach the last 32 of a major after Lu Yen-Hsun.

But Haas, seeded 13th and the oldest player left in the men's draw, overwhelmed Wang in just over 90 minutes to set up a last 32 clash against Spain's Feliciano Lopez.

Wang, 28, has played mainly on the second-tier Challenger circuit this year and the last time he defeated a top 20 player was Nikolay Davydenko at Queen's Club in 2006.

He never threatened to end that barren run against Haas, who has enjoyed a remarkable resurgence in the last two years.

After a series of injuries threatened to end his career, Haas has battled back into the top 20.

The former world number two chalked up his 100th Grand Slam victory when he defeated Dmitry Tursunov in the first round -- his first win at Wimbledon since 2009, when he reached the Wimbledon semi-finals before losing to Roger Federer.

Persistent rain on Thursday had forced this tie to be postponed for 24 hours.

But Haas made up for lost time as he broke in the fourth game to seal the first set.

The German remained in complete control in the second set, breaking twice in the first three games to leave Wang in deep trouble.

Haas showed no mercy, breaking at 5-5 in the third set to close out the win.