Haas was a Wimbledon semi-finalist in 2009 and Djokovic has no intention of underestimating the German. Williams, chasing a sixth Wimbledon title and 17th Grand Slam crown, faces German 23rd seed Sabine Lisicki for a quarter-final place. 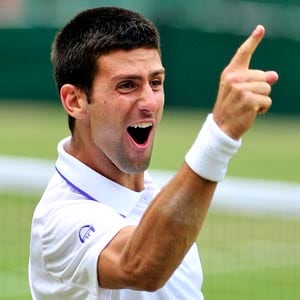 Novak Djokovic and Serena Williams top the bill at Wimbledon's super Monday when they attempt to capitalise on the shock exits of their heavyweight Grand Slam rivals.

Djokovic, the top seed and world number one, takes on 35-year-old Tommy Haas, the oldest player left in the men's draw.

Djokovic, the 2011 champion, has not dropped his serve in his three rounds so far and in his straight sets demolition of Jeremy Chardy on Saturday he fired 38 winners and just three unforced errors.

Haas was a Wimbledon semi-finalist in 2009 and Djokovic has no intention of underestimating the German.

"It's going to be a big challenge for both of us," the Serb said.

"He loves playing on grass and beat Roger (Federer) in the final of Halle last year.

"He doesn't look like a 35-year-old for sure. He's full of confidence on the court and he's been playing very close to the best tennis of his life.

"There's no clear favourite in that match. I need to try to repeat this performance. If I do I think I have a good chance."

Victory on Monday will give her a 35th successive win, taking her level with sister Venus's record set in 2000.

Lisicki was a semi-finalist in 2011 and made the quarter-finals last year, knocking out Maria Sharapova on the way.

"I was in this situation last year when everybody was saying that Sharapova was the favourite. I'm probably going into the match on Monday as the underdog, but I like that," said Lisicki.

Youzhny tackles second seed Andy Murray with a 2-0 career deficit against the US Open champion and a reputation for living on the edge when his game goes astray.

At the French Open, the 29-year-old smashed the same racquet nine times, sending shards spiralling into the air and ball boys running for cover in a stunning meltdown during his defeat to Haas.

That random act of violence becoming an instant YouTube hit.

Youzhny, seeded 20 at Wimbledon, is notorious on the tour for his hair-trigger temper.

At Miami in 2008, playing Spain's Nicolas Almagro, he smashed his racquet on his head so violently that blood spilled onto the court.

These days, he celebrates each victory by calmly bouncing his racquet on his head instead.

"Sometimes everybody has some problems. Yeah, bad luck for the racquet and bad luck for me because I still lost that match," said Youzhny, who made the Wimbledon quarter-finals last year.

"I think during the match, when I do this one, maybe it helps me, and I come back like another player to the court.

"It happened to me only a few times, but it happens sometimes with all people, I think."

Kanepi, meanwhile, tackles Laura Robson -- the first British woman in the last 16 since 1998 -- having already eliminated Tara Moore of the home nation in the first round.

The 28-year-old, ranked world number 46, has already illustrated her potential at the tournament, knocking out German seventh seed Angelique Kerber in the second round.

Kanepi missed the last half of the 2012 season with an Achilles tendon injury, only returning to the circuit in April.

"I think I'm faster and I'm fitter than before," insisted Kanepi, who said she is happy to face a hostile crowd.

"They are all going to be against me, the crowd. I think I'm going to enjoy that."