Laura Robson stunned Russian 10th seed Maria Kirilenko with a straight sets win on Tuesday that ensured a female British presence in the second round at Wimbledon. 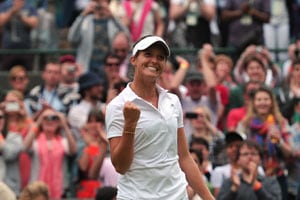 Laura Robson stunned Russian 10th seed Maria Kirilenko with a straight sets win on Tuesday that ensured a female British presence in the second round at Wimbledon.

Robson, 19, the world number 38, won 6-3, 6-4 in an hour and 18 minutes on Court One to make sure Andy Murray was not the only home player to get through the first round.

Robson showed maturity to defeat the more experienced Kirilenko, with some excellent shots down the line and improved serving.

She now faces Colombian qualifier Mariana Duque-Marino in the next round.

"I'm still so nervous, even on the last point I didn't know whether my forehand was in or not, walking to the net unsure," Robson said.

"That was a big one for me just because of all the nerves and playing in front of your home crowd at Wimbledon.

"I could have gone 5-1 up in the second and I lost my focus a little bit and started thinking about winning.

"Any big win gives you loads of confidence so I'm going to go into the next match with a good focus."

Robson won the Wimbledon girls' title on the same court in 2008.

She also won the London 2012 Olympic mixed doubles silver medal with Murray at the All England Club.

Heather Watson, the world number 56, was the only British woman to make it through to the main draw on merit.

But she lost her first-round match in straight sets 6-3, 7-5 to American teenager Madison Keys earlier Tuesday.

Guernsey player Watson is still working her way back to full match fitness after two months out with glandular fever.

World number two Murray was the only one of seven British players in action on Monday to win, and is the only home player left in the men's draw after wildcards James Ward and 18-year-old Kyle Edmund both tumbled.

The only other Briton left in the women's draw is wildcard Tara Moore, who has yet to play her first round match against Estonia's Kaia Kanepi, the world number 46.

Comments
Topics mentioned in this article
Wimbledon 2013 Tennis Maria Kirilenko
Get the latest Cricket news, check out the India cricket schedule, Cricket live score . Like us on Facebook or follow us on Twitter for more sports updates. You can also download the NDTV Cricket app for Android or iOS.