Ferrer advanced with a scrappy 6-3, 3-6, 7-6 (4), 7-5 win over Roberto Bautista Agut in a match originally scheduled for Thursday but pushed back because of rain. 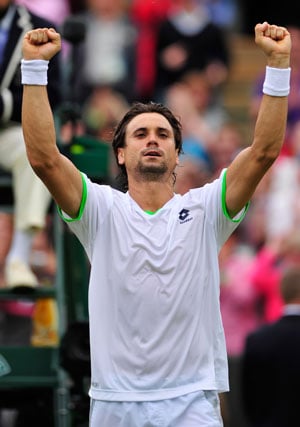 Fourth-seeded David Ferrer won an all-Spanish encounter against Roberto Bautista Agut on Friday to reach the third round at Wimbledon for a sixth consecutive year.

Ferrer advanced with a scrappy 6-3, 3-6, 7-6 (4), 7-5 win in a match originally scheduled for Thursday but pushed back because of rain. He will next face No. 26 Alexandr Dolgopolov.

After losing in the French Open final to Rafael Nadal, Ferrer has struggled to switch from clay to grass. As the defending champion he lost in the first round at Rosmalen in his warmup tournament for Wimbledon and then was taken to four sets in his first-round match here.

Ferrer said "I feel better than in the first day and last week. I'm improving my game on these courts."