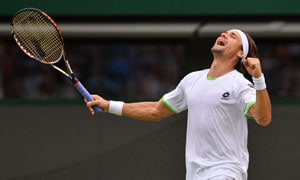 In a back-and-forth match on Court 1, Ferrer needed treatment for blisters on his foot but still managed to outlast the 26th-seeded Dolgopolov and reach the last 16 for the fourth year in a row.

He reached the quarterfinals last year and is coming off his first career Grand Slam final at the French Open.

Dolgopolov was trying to become the second Ukrainian man to reach the fourth round at the All England Club after Andrei Medvedev in 1994.

Comments
Topics mentioned in this article
Tennis Wimbledon 2013 Nicolas Almagro David Ferrer Alexandr Dolgopolov
Get the latest Cricket news, check out the India cricket schedule, Cricket live score . Like us on Facebook or follow us on Twitter for more sports updates. You can also download the NDTV Cricket app for Android or iOS.