The No. 2-seeded Murray is trying to become the first British man since Fred Perry in 1936 to win the title at the grass-court Grand Slam tournament. 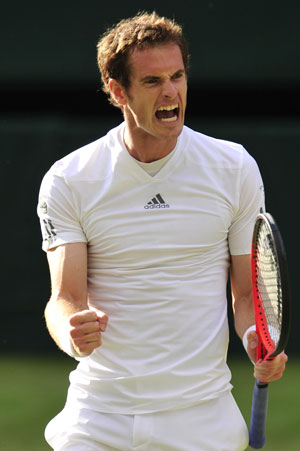 Murray, the runner-up to Roger Federer in 2012, will face Spain's Fernando Verdasco for a place in the semi-finals.

The Scot has an 8-1 winning record over unseeded Verdasco, a former top-10 player.

Murray had to battle back from 2-5 down in the second set to quell the threat posed by Youzhny who needed treatment on a shoulder injury after one game of the third set.

Murray put in an impressive serving performance, firing 15 aces and hitting 45 winners past the experienced Russian.

"It was a tough match, the first couple of sets especially. He also had a few chances at the beginning of the third set as well but once I got ahead in the third I concentrated very hard not to let him back in like I did in the second set," said Murray.

Despite closing in on another final, Murray said he could not become complacent after the shock early exits of Federer and Rafael Nadal.

"I don't take anything for granted. I know how hard these tournaments are to win and to do well in. So I don't expect to come into these sort of events to win them," said the US Open and Olympic champion.

"There's no guarantees here at all. I just concentrate on each match. Serena Williams lost and she doesn't lose particularly often.

"Roger's lost and Rafa's lost. All these guys and girls are better players than me and have achieved a lot more than me and so if they can lose so can I and I just concentrate on the next one and try and get through it."

Verdasco will pose a different challenge with Murray not having faced a left-hander in 2013.

"I haven't played a lefty this whole year amazingly. I need to return some lefty serves and hope for the best."

The 29-year-old is playing in his 41st straight Grand Slam.

Comments
Topics mentioned in this article
Tennis Wimbledon 2013 Mikhail Youzhny Andy Murray
Get the latest Cricket news, check out the India cricket schedule, Cricket live score . Like us on Facebook or follow us on Twitter for more sports updates. You can also download the NDTV Cricket app for Android or iOS.