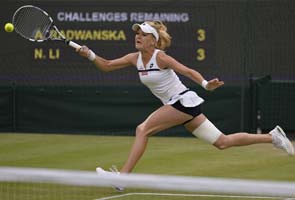 Radwanska, the runner-up in 2012, took victory on an eighth match point.

The 24-year-old Pole, who had gone into the quarter-final with a 4-6 losing record against Li, also overcame an injury scare when she needed her right thigh tightly-strapped at the start of the deciding set.

"Li played unbelievable tennis. I was just happy to get through after struggling in the final set," said Radwanska who had also needed three sets to beat Tsvetana Pironkova in the fourth round.

"I have played so much tennis in the last few days, that's why I have the problem."

Radwanksa and Lisicki have played twice on the WTA Tour, winning a match apiece.

"We have known each other since our junior days -- it'll be a great challenge on grass," said the slender Pole.

Li fired 58 winners in Tuesday's quarter-final but was undone by 40 unforced errors.

Lisicki followed-up her shock defeat of Williams with a 6-3, 6-3 win over Estonia's Kaia Kanepi to reach her second Wimbledon semi-final.

The German 23rd seed also made the last-four as a wildcard in 2011, three months after her world ranking had slumped to 218.

"It was an amazing match yesterday, but I had to make sure that I had calmed down and was ready for today," said Lisicki, who completed victory in her fourth Wimbledon quarter-final just before rain began to fall.

"I have had experience of other years to help me. I also played the semi-finals in 2011 so that helped me be ready for today."

Lisicki, who was defeated by Sharapova in the semi-finals two years ago, insisted that she felt no pressure coming into Tuesday's match having downed Williams in the fourth round.

"There's no pressure. I just keep playing the game that I love," she added.

It's also a surface she loves -- the German's record at Wimbledon stands at 18 wins and just four losses while she is only 16-15 at the three other Slams.

Kanepi has now played and lost six quarter-finals at the majors.

"I hit winners in previous matches and did well, but today I was missing a lot," admitted the 28-year-old.

Lisicki showed no signs of a hangover from her three-set triumph over Williams 24 hours earlier as the 23-year-old Florida-based German broke the world number 46 Kanepi in the opening game.

She backed it up with another solid break in the ninth game to take the opening set.

Lisicki, who has rebuilt her career after a serious ankle injury three years ago, suffered a brief wobble when she was broken for the first time in the third game of the second set by the 2010 quarter-finalist.

But she levelled immediately before going on to claim five of the next six games to clinch victory inside just 65 minutes on the back of 23 solid winners.

Later Tuesday, 2011 champion Petra Kvitova, the highest seed left in the bottom half of the draw, takes on Belgium's Kirsten Flipkens.

Czech eighth seed Kvitova, the only player born in the 1990s to win a major, is bidding for a third Wimbledon semi-final.

Flipkens, the 27-year-old 20th seed, is playing in her first Grand Slam quarter-final.

She missed the tournament last year after spending two months away from the sport battling blood clots in her legs, an absence which saw her ranking plummet to 262 in the world.

The winner of that tie will face either French 15th seed Marion Bartoli, the 2007 runner-up, or American 17th seed Sloane Stephens, who was a semi-finalist at the Australian Open this year.