Date-Krumm is the oldest player competing in the main draw at the All England Club, but age trumped youth as she crushed 18-year-old Carina Witthoeft 6-0, 6-2. 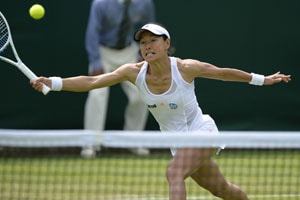 Kimiko Date-Krumm rolled back the years as the Japanese veteran thrashed German teenager Carina Witthoeft 6-0, 6-2 in the Wimbledon first round on Tuesday.

At 42, Date-Krumm is the oldest player competing in the main draw at the All England Club, but age trumped youth on Court 14 as she crushed Witthoeft, an 18-year-old qualifier, in just 44 minutes, hitting 17 winners to her opponent's two.

She next plays Austrian 28th seed Tamira Paszek or Romania's Alexandra Cadantu as she seeks to emulate her run to the third round of the Australian Open in January.

Date-Krumm had won just once in her last five matches, but the world number 84 is ranked 109 places above Witthoeft and she ruthlessly exposed her young opponent's lack of experience.

Witthoeft was making her Wimbledon debut and her first appearance at a Grand Slam.

In contrast, Date-Krumm was playing in her 103rd Grand Slam match and competing at Wimbledon for the 12th time.

Date-Krumm enjoyed a fairytale run to the Wimbledon semi-finals in 1996 before suddenly announcing her retirement.

She returned to the women's tour 12 years later and enjoyed two notable landmarks, becoming the oldest player to beat a top-10 opponent and the second oldest to win a WTA Tour title when she triumphed in Seoul aged 38.

And the Japanese veteran quickly made her extra experience pay dividends as she moved the teenager out of position to break in the opening game.

When she landed another break in Witthoeft's next service game the set was effectively over.

Date-Krumm kept her foot on the gas, breaking for a third time before closing out the set in 16 minutes.

Her stranglehold on the tie showed no signs of weakening in the second set as she broke in the opening game.

Witthoeft finally got on the scoreboard in the ninth game, but that only delayed the inevitable and Date-Krumm sealed the win when the German drove a forehand long.