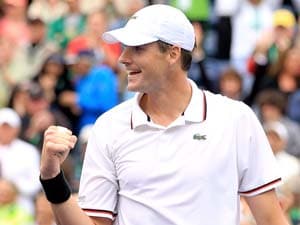 The United States suffered their worst men's singles performance at Wimbledon for over a century when they were left without a player in the third round for the first time since 1912. (In pic: US star John Isner)

In all, 11 American men started out in the main draw on Monday but their only two seeded players -- John Isner and Sam Querrey were out by Wednesday.

Isner, the 18th seed, retired with an injury from his second round match against France's Adrian Mannarino.

Querrey, the 21st seed, lost a five-setter in the first round to Australia's Bernard Tomic.

By Thursday, only James Blake, Denis Kudla and Reynolds were left.

It was a challenge too far as Blake fell to Tomic and Kudla was put out by Ivan Dodig of Croatia.

So it's been almost 10 years and now 39 Grand Slams since the United States was able to salute a men's trophy winner at the majors.

Pete Sampras was the last American man to win Wimbledon when he captured his seventh title in 2000.

Since then, the only American man to trouble the All England Club engravers was Isner whose name now adorns a plaque on Court 18 to recognise his winning role in the world's longest tennis match in 2010.

Isner has still to get beyond the second round at Wimbledon despite having the killer-serve which should, in theory, ease his path through the draw.

"I was the highest seeded player on a surface that I'm tough to beat on, given how well I can serve and how much I can hold serve," said Isner.

"I had a good chance to go pretty far here. My deal is just as long as I can get through the first couple of rounds I feel like I always get better as events go on."

Ryan Harrison, 21, who was another first round victim.

His ranking rose to 43 in July last year but his progress has stalled and he went into Wimbledon at 84 in the world.

Reynolds believes there is hope and that there is some promising young talent in the college system and in the early stages of ATP careers.

"You have guys like Jack Sock and obviously Steve Johnson and Kudla, guys like that, that have huge weapons," said Reynolds.

"They've got huge serves, huge forehands. Obviously, it's a matter of harnessing those, cutting down on the errors, and using that.

"I do see those guys as having top potential. Isner had a freak accident. He could have gone a long way. Querrey had tough trial with Tomic.

"There's a lot of guys are coming up. They're knocking on the doorstep of top 100."

Comments
Topics mentioned in this article
Wimbledon 2013 Tennis United States Bobby Reynolds John Isner
Get the latest Cricket news, check out the India cricket schedule, Cricket live score . Like us on Facebook or follow us on Twitter for more sports updates. You can also download the NDTV Cricket app for Android or iOS.