Sania Mirza to pair with Jie Zheng at US Open 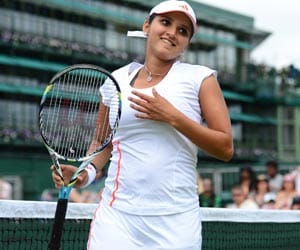 Sania Mirza will pair with Chinese Jie Zheng for the US Open and the Indian ace is hoping that they will able to prepare well for the last Grand Slam of the season despite not having the luxury of time.

"I gonna try with Jie Zheng. We will take time to get used to each other and we have four weeks before the US Open," Sania said on the sidelines of the IBL auction.

Sania said the game of the Chinese, with whom she had fought many a interesting singles battles in the past, compliments hers.

"Back hand is her strength, she plays close to the net. From the back of the court is my strength. She has won the Wimbledon and Australian Open. She made a couple of semifinals in singles. She knows what it takes at the highest level. We had some great singles battles in the past. I lost my Asian Games singles medal when I lost in three sets to her in Doha, so hopefully we will hope to win some together," Sania said.

Talking about her partnership with American Bethanie Mattek-Sands, with whom she won her last WTA doubles title (14th), Sania rued that the pairing could not continue.

"Unfortunately, me and Bethanie were playing so well for the last year but unfortunately her body is very fragile and it is tough for her to play both singles and doubles so right now she has decided to stay away from doubles as she has lost a lot due to injuries and she doesn't want to go out again," she said.

Sania said giving up singles was not easy but she had to listen to her body.

"I miss singles terribly but it is a choice I make because I don't feel I am good enough anymore. I don't want to be 100 odd in the world and still play for the heck of it. My body is fragile and after three surgeries in five years, it is tough and you have to make some tough decision and it was very difficult for me."

Asked why India could not see rise of see more women's singles players, Sania said, "I have been asked this question for the last 10 years and every time I draw a blank. There are many reasons. A lot has to do with physical ability, we don't train well. We do things at 15 which we need to do at 8. Look at the way, how Chinese have revolutionised and come up from no where."

Talking about Mahesh Bhupathi's International Tennis Premier League (ITPL) which will kick off next year, Sania said it will help popularise the game further.

Comments
Topics mentioned in this article
Tennis Jie Zheng Leander Paes Rohan Bopanna Sania Mirza US Open 2013 Wimbledon 2012 Wimbledon 2013
Get the latest updates on IPL Auction 2023 and check out  IPL 2023 and Live Cricket Score. Like us on Facebook or follow us on Twitter for more sports updates. You can also download the NDTV Cricket app for Android or iOS.