Sabine Lisicki backs up win over Serena with another at Wimbledon

Showing no drop-off after her dramatic victory over Williams, the 23rd-seeded German returned on Tuesday and made quick work of a much less intimidating opponent, 46th-ranked Kaia Kanepi 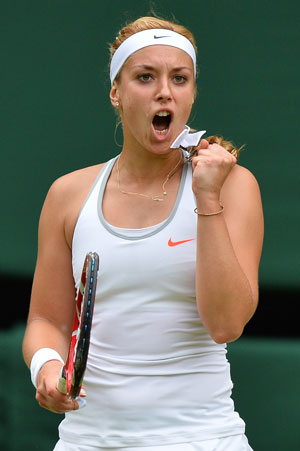 If Sabine Lisicki had a letdown after defeating Serena Williams, it didn't show.

If Lisicki is penciling herself into the Wimbledon final, she isn't saying.

Showing no drop-off after her dramatic victory over Williams, the 23rd-seeded German returned on Tuesday and made quick work of a much less intimidating opponent, 46th-ranked Kaia Kanepi, dispatching her 6-3, 6-3 in 65 minutes to advance to her second career Wimbledon semifinal. (Sabine Lisicki to face Radwanska)

"I was ready today," Lisicki said. "I knew from the past, out of experience, that I needed to make the switch quickly to be ready, and that's what I did."

Indeed. Lisicki opened the match by breaking Kanepi's serve in the first game and didn't look back in that set. In the second, she had one hiccup - a game in which she double-faulted three times to drop a break and fall behind 2-1. She broke back right away, however, and won four of the next five games to close out the match.

Now, the 23-year-old German finds herself in the Wimbledon semifinals for the second time in three years. Her win against Williams made her the new, odds-on favorite to win the title and even pushed Britain's favorite tennis player, Andy Murray, off the back pages of a couple London tabloids.

All of which means almost nothing - at least to hear Lisicki tell it.

"Match by match," she said. "Did that from the start and will continue to do that."

She'll play the winner of a quarterfinal between No. 4 Agnieszka Radwanska and No. 6 Li Na. That match started the same time as Lisicki's but was still undecided more than two hours after she walked off the court. A pair of rain delays, an injury timeout and split sets between the two highest seeds left in the tournament extended the match deep into the afternoon.

Waiting for Li and Radwanska to finish were 20th-seeded Kirsten Flipkens and eighth-seeded Petra Kvitova. Along with Li, Kvitova is the only Grand Slam champion left in the women's draw. The winner of that match will play either No. 15 Marion Bartoli or No. 17 Sloane Stephens.

Lisicki had the luxury of sitting back and watching all that action unfold. Her match against Kanepi was nowhere near as grueling as the emotion-packed upset over Williams the previous day.

"It was a different matchup," Lisicki said. "I was just as focused as yesterday because I knew it's going to be tough after yesterday's match to just keep the level up. But I think I did a very good job to go for my shots and play smart. It had to be a different game today."

Whereas Lisicki was forced to match Williams' power, she played more of a finesse game against Kanepi. Six of her 23 winners against Kanepi came off drop shots and Lisicki only needed two aces (compared to 10 against Williams in their three-set match) to defeat her Estonian opponent.

Kanepi, who advanced to the quarterfinals by defeating Britain's Laura Robson, said she couldn't match her play from that victory. She had 13 winners and 23 unforced errors against Lisicki and fell to 0-5 in Grand Slam quarterfinals.

"I thought (when) I tried to attack in previous matches, I hit winners and did well, but today I was missing a lot," Kanepi said. "But on grass there is no Plan B. I just have to go for my shots. If there is a ball, I have to hit it."

Comments
Topics mentioned in this article
Wimbledon 2013 Tennis Kaia Kanepi
Get the latest updates on IPL 2021, check out the IPL 2021 Schedule and Indian Premier League Live Score . Like us on Facebook or follow us on Twitter for more sports updates. You can also download the NDTV Cricket app for Android or iOS.