Marion Bartoli: Wimbledon win a sign of bigger and better things to come

Marion Bartoli, beaten by Venus Williams in her only previous Grand Slam final at Wimbledon in 2007, is the fifth oldest woman to become a first-time major winner in the Open Era. 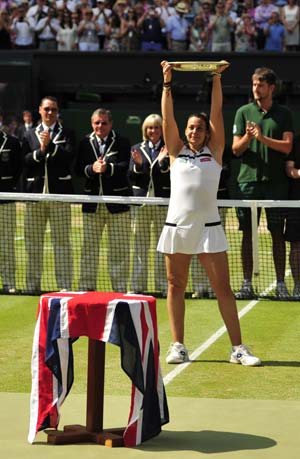 Wimbledon champion Marion Bartoli insists her perfect day on Centre Court could be just the start of another remarkable chapter in one of the more unlikely tennis success stories.

Bartoli romped to her first Grand Slam title on Saturday as the French 15th seed thrashed Germany's Sabine Lisicki 6-1, 6-4 in the Wimbledon final. (How Bartoli went past Lisicki)

The 28-year-old, beaten by Venus Williams in her only previous Grand Slam final at Wimbledon in 2007, is the fifth oldest woman to become a first-time major winner in the Open Era. (Related read: Quirky Bartoli makes a unique Wimbledon champion)

It was an incredible moment for Bartoli, whose career had been on a downward spiral in recent years and hit rock bottom in February when she struggled with the emotional decision to move on from her dad Walter, who had coached her since childhood. (Also see: Match in pics)

She eventually turned to former Wimbledon champion Amelie Mauresmo for help after failing to strike up a rapport with a series of coaches and the transformation has been swift and stunningly success.

With a first Grand Slam crown secured, Bartoli, who celebrated her victory by clambering into the players' box to embrace her father and Mauresmo, hopes the second phase of her career provides more of the success that once seemed so elusive. (Marion Bartoli: From oblivion to glory)

"Of course I'm going to try my hardest to get some more. Now that I get one, I definitely believe I can get more of them," she said.

"But I just want to enjoy this one because I haven't still realised I'm really the Wimbledon champion.

"It will take me some few days. And actually when I do realise what I've done then I will maybe think about the US Open and getting a shot over there."

Bartoli has never been one to do things the easy way.

She grew up outside the tennis mainstream, coached by her doctor father who had no background in the sport and yet gave up his job to teach his daughter how to become a professional.

Throughout her career Bartoli's game has been marked by bizarre routines as she jumps, skips, shuffles and twirls her racket before serving or returning.

She has never been afraid to speak her mind, falling out with French tennis chiefs, who banned her from last year's Olympics over their refusal to let Walter coach her while she was representing her country on Fed Cup duty.

But Bartoli is adamant her intense and passionate personality is an essential part of her game and won't be dulled by her success.

"Going through those hard moments makes this one even better," she said. "It will not change me as a person.

"It's always been a part of my personality to be different. I think being just like the others is kind of boring.

"I'm a very tough person. I played the whole second set of the final with a blister under my big toe and when I took my sock off it was red with blood.

"I didn't call for the trainer, even if I felt like I could barely walk at the end of the match.

"I'm this kind of person. I can focus and be really as strong as wood."

After so many disappointments during her chequered career, Bartoli admitted the moment of victory against Lisicki felt even better than she could ever have imagined.

"For a tennis player who starts to play at five or six years old and then turns pro, your dream is to win a Grand Slam," she said.

"You think about it every single day for hours on end. You go through pain, tears and low moments, and then it actually happened.

"Those five, ten seconds before you shake the hands of your opponent, you felt like you're almost not walking any more on earth. You're really flying.

"It was a packed Centre Court on a beautiful day and I won in straight sets.

"To share this moment with my dad was the perfect day."

Comments
Topics mentioned in this article
US Open 2011 Wimbledon 2011 Wimbledon 2012 Wimbledon 2013 Tennis Anastasia Pavlyuchenkova Somdev Devvarman Venus Williams Serena Williams Alisa Kleybanova Marion Bartoli
Get the latest updates on IPL 2020, check out the IPL Schedule for 2020 and Indian Premier League (IPL) Cricket live score . Like us on Facebook or follow us on Twitter for more sports updates. You can also download the NDTV Cricket app for Android or iOS.