Taiwan's tennis hero Su-Wei Hsieh is mulling giving up her Taiwanese citizenship to represent China, where she could receive a much bigger sponsorship deal her father said on Monday, after her historic victory in the Wimbledon women's doubles contest. 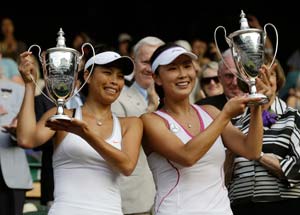 Taiwan's tennis hero Su-Wei Hsieh is mulling giving up her Taiwanese citizenship to represent China, where she could receive a much bigger sponsorship deal her father said on Monday, after her historic victory in the Wimbledon women's doubles contest.

The hard-won triumph made Hsieh the first Taiwanese tennis player ever to grab a Grand Slam title.

But while the island was basking in her glory, Hsieh's father, Hsieh Tze-lung, took the public by surprise when he said his daughter may give up her Taiwanese citizenship to represent China in exchange for an annual 10 million yuan ($1.63 million) sponsorship deal offered by a Chinese brewery.

In an interview with AFP by telephone, her father said: "It is not that we don't love Taiwan... we have no choice.

"The amount is barely half of the total I need to support the training and related spending of Su-Wei as well as her brother and a younger sister," both of whom are teenaged tennis players, her father said.

The remarks sparked concern in Taiwan that the island would lose its latest sporting icon. Sport chiefs said they were actively seeking sponsorship deals from local companies.

"My understanding is that some big enterprises have voiced their desire of providing financial assistance to Hsieh and other local talented athletes," Lin Che-hung, spokesman for the Sports Administration, told AFP.

Wu Chia-ching, a pool world champion in 2005, rocked Taiwanese sports when he announced in April 2011 he had become a Chinese citizen and would represent China in a tournament.

Wu was the first Taiwanese sportsman to renounce citizenship in order to play for China, fuelling concerns that talent was heading to the mainland.

China has been wooing the island's top talent in sports including basketball, baseball and golf amid warming ties between the neighbours.

The most alarming development for Taiwanese fans is perhaps in baseball, where Taiwanese coaches have been credited with playing an important part in China's rise in the sport.

Taiwan and China split in 1949 at the end of a civil war and are still technically at war despite an easing of tensions since 2008 when Ma, of the China-friendly Kuomintang party, came to power on a platform of beefing up trade and tourism links. Ma was re-elected in January 2012.

Comments
Topics mentioned in this article
Tennis Wimbledon 2013 Su-Wei Hsieh
Get the latest updates on IPL Auction 2023 and check out  IPL 2023 and Live Cricket Score. Like us on Facebook or follow us on Twitter for more sports updates. You can also download the NDTV Cricket app for Android or iOS.