Bob, Mike wrap up the "Bryan Slam" at Wimbledon 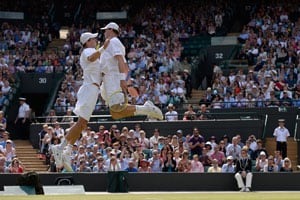 The Bryan Slam is complete. Twin brothers Mike and Bob Bryan captured their fourth straight major Saturday at Wimbledon with a 3-6, 6-3, 6-4, 6-4 victory over Ivan Dodig and Marcelo Melo.

The Americans won their 15th Grand Slam tournament and became the first men's team in Open-era tennis to hold all four Grand Slam titles at the same time. They're also the first to hold all the slams and an Olympic gold medal.

If they win the U.S. Open, they'll join Ken McGregor and Frank Sedgman as the second men's team to complete a calendar Grand Slam. The Aussie duo did it in 1951, 17 years before the Open era began.

The Bryans fell behind 5-0 in dropping the first set but rallied for their 24th straight victory.

Comments
Topics mentioned in this article
Tennis Wimbledon 2011 Wimbledon 2013 Bob Bryan Mike Bryan Ivan Dodig Marcelo Melo
Get the latest Cricket news, check out the India cricket schedule, Cricket live score . Like us on Facebook or follow us on Twitter for more sports updates. You can also download the NDTV Cricket app for Android or iOS.