World No.2 Andy Murray created history by becoming the first Briton since Fred Perry in 1936 to win the mens singles title at the All England Club. 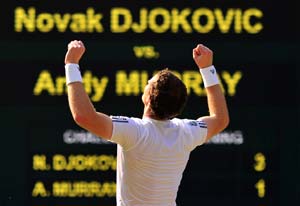 World No.2 Andy Murray created history by becoming the first Briton since Fred Perry in 1936 to win the men's singles title at the All England Club. The 26-year-old Scot beat World No.1 Novak Djokovic 6-4, 7-5, 6-4 in three hours and nine minutes to lift the Wimbledon title. (Also see in pics: Twitter hit by Murray mania)

"What an incredible day!! So proud of my lil bro! What a champion!!" tweeted Jamie, who had won the Wimbledon mixed doubles title in 2007 with Jelena Jankovic of Serbia. (See in pics: How home support made all the difference for Murray)

Comments
Topics mentioned in this article
Tennis Wimbledon 2011 Wimbledon 2013 Novak Djokovic Andy Murray Jamie Murray
Get the latest updates on India vs England Series, India vs England , live score and IPL 2021 Auction . Like us on Facebook or follow us on Twitter for more sports updates. You can also download the NDTV Cricket app for Android or iOS.