In a titanic struggle played out over four hours and 43 minutes, Serbia's Djokovic squandered two match points in the fourth set tiebreak before going on to finally subdue the Argentine eighth seed thanks to a remarkable 80 winners and 22 aces. Murray's seventh Grand Slam final on Sunday will be his fourth meeting with Djokovic with a major title on the line. 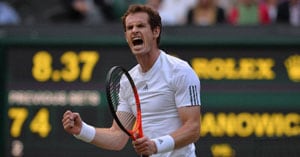 And there was no shortage of drama in the second semi-final as world number two Murray beat Polish 24th seed Jerzy Janowicz 6-7 (2/7), 6-4, 6-4, 6-3 in a bad-tempered clash marred by a row over the decision to shut the Centre Court roof. (Murray survives Janowicz, roof rage to reach final)

Murray's seventh Grand Slam final on Sunday will be his fourth meeting with Djokovic with a major title on the line. (Djokovic into final after epic win over Del Potro)

Djokovic defeated Murray in the 2011 and 2013 Australian Open finals, while the Scot won a five-set thriller to seal his maiden Grand Slam title at the US Open last year.

In a titanic struggle played out over four hours and 43 minutes, Serbia's Djokovic squandered two match points in the fourth set tiebreak before going on to finally subdue the Argentine eighth seed thanks to a remarkable 80 winners and 22 aces. (Marathon man Djokovic relishes major drama)

Djokovic, bidding for a seventh Grand Slam crown, said: "It was one of the best matches I've been part of, certainly one of the most exciting. It was so close and nothing could separate us.

"I'm very proud to go through. When I lost the fourth set of course it was disappointing because I was close to winning and didn't capitalise. He came up with some big forehands. It was a very high level of tennis.

"I was ready to go five sets. I was able to stay tough and get through in the end."

A shell-shocked Del Potro added: "I was so close. I played really good tennis for four and a half hours but he hits the ball so hard.

"It was my best tennis on grass but against the world number one it's not enough."

After that epic encounter, sure to be remembered as one of the all-time great Wimbledon matches, the crowd barely had time to catch their breath before home favourite Murray had their nerves jangling in a match marked by huge emotional swings.

Murray remains on course to end Britain's 77-year wait for a male winner of the Wimbledon singles' crown, but the Scot had to do it the hard way once again.

Just 48 hours after battling back from two sets down to defeat Fernando Verdasco, Murray survived an early pummelling from Janowicz and then a controversial decision to close the roof due to bad light when he had just taken a two sets to one lead.

Murray was furious with Janowicz, who had been pleading for the roof to be shut, and referee Andrew Jarrett, claiming there was still time to finish the match in daylight.

But he returned to finish the job, sealing his second successive appearance in the final with 20 aces and 18 winners in two hours and 52 minutes.

"There was still 45 minutes of light left," Murray said of the roof controversy.

"This is an outdoor event and I believe you should play as much as possible outdoors. 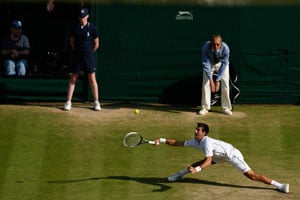 "I had 20 minutes, took a shower and got back to work. He was on his phone to someone. That's the way he is, he plays loose on the court as well.

"I'm delighted. He's very talented and unpredictable, he's got a huge serve and he didn't give me much rhythm.

"But after I got back from 1-4 down in the third set I felt the momentum was with me."

Janowicz said he was unconcerned about Murray's anger over the roof being closed.

"I don't care if was angry, I was just concerned about myself," said the Pole.

Murray, who missed the recent French Open due to injury, has now reached the final in each of his last four Grand Slam appearances.

However, that will mean little to the 26-year-old unless he avenges last year's tearful final defeat against Roger Federer and emulates Fred Perry's 1936 Wimbledon triumph.

Comments
Topics mentioned in this article
Tennis Wimbledon 2012 Wimbledon 2011 Wimbledon 2013 David Ferrer Somdev Devvarman Andy Murray Novak Djokovic Juan Martin del Potro Jerzy Janowicz
Get the latest updates on IPL 2020, check out the IPL Schedule for 2020 and Indian Premier League (IPL) Cricket live score . Like us on Facebook or follow us on Twitter for more sports updates. You can also download the NDTV Cricket app for Android or iOS.