After loss to Andy Murray, Novak Djokovic serves an ace in charity dinner

The event, attended by celebrities like Naomi Campbell and Boris Becker, was for a social cause as part of the Novak Djokovic Foundation. 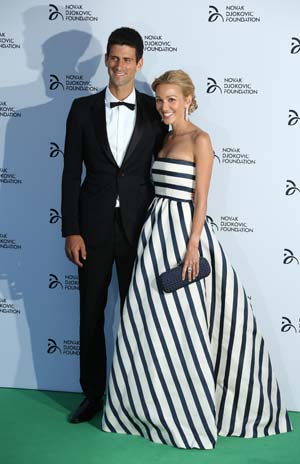 Love knows no defeat. And Novak Djokovic is always a comprehensive winner when it comes to model girlfriend Jelena Ristic.

Despite his straight-sets defeat to Andy Murray in the Wimbledon final, the 26-year-old put all remorse behind as he and Ristic hosted a charity gala dinner on Monday. The couple looked charming and Ristic showed that she still loves 'her champion' every bit as she posed next to him for the shutterbugs, according to a report in UK's Daily Mail.

The party was hosted at London's Roundhouse and the hosts were extremely suave in their off-court appearance. While Djokovic wore a crisp black suit, his lady love stole the limelight with a flowing navy and white strapless gown.

It, however, was not just about her appearance as Ristic complimented her Serbian boyfriend as well as charming the guests which included celebrities like supermodel Naomi Campbell, actor Gerard Butler, former tennis champion Boris Becker and royalty - Princess Beatrice and Princess Eugenie.

The charity dinner was for a social cause as part of the Novak Djokovic Charity Foundation. (Also read: Murray and Djokovic - the new age tennis warriors)

Comments
Topics mentioned in this article
Tennis Wimbledon 2011 Wimbledon 2013 Novak Djokovic Andy Murray
Get the latest updates on IPL Auction 2023 and check out  IPL 2023 and Live Cricket Score. Like us on Facebook or follow us on Twitter for more sports updates. You can also download the NDTV Cricket app for Android or iOS.