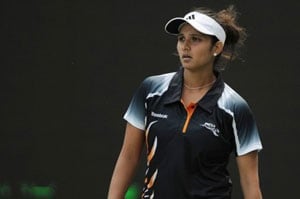 US Open: Sania Mirza-Jie Zheng knocked out in doubles semis

Sania and her Chinese partner Jie Zheng lost to Australian pair of Ashleigh Barty and Casey Dellacqua 6-2 6-2 in the last-4 clash.

Sania Mirza, the only Indian female to win Grand Slam title, has won two titles so far this season. Both the titles came with American partner Bethanie Mattek-Sands, who now plays only singles.

Sania Mirza to pair with Jie Zheng at US Open

Bopanna was playing his second match of the day, after having lost the men's doubles semifinals to top seeds Mike Bryan and Bob Bryan.

The Asian pair of Rohan Bopanna and Jie Zheng defeated unseeded Swedish-Hungarian duo Johan Brunstrom and Katalin Marosi 7-6(4), 3-6, 6-1 in one hour and 29 minutes.

Bopanna and Mahesh Bhupathi progressed to the quarterfinals of the men's doubles event with their respective partners even as Sania crashed out of the women's doubles competition last night.

Wimbledon 2013: Fifth seed Sara Errani crashes out in Round 1

Errani, a semi-finalist at the French Open earlier this month had gone into her first round clash carrying a groin injury which forced her out of Eastbourne last week.

The 33-year-old - who has won seven Grand Slam titles in all - also pulled out of the doubles there with her sister Serena because of a back problem.

It was a first Grand Slam title for the Russian pair and it was the first time they had beaten the Italians in five attempts, their last encounter being a semi-final loss at the Australian Open in January.

French Open: All that you need to know before Nadal vs Ferrer final

Rafael Nadal may have had a huge advantage over very good friend and compatriot David Ferrer up till now but the Spaniard will know that his fellow country-man has all the ingredients and qualities to overcome all that and clinch the 2013 French Open men's singles title.

He has won 58 out of 59 matches at Roland Garros and boasts a 19-4 winning record over Ferrer. Sixteen of those wins have been on clay. The 31-year-old Ferrer has won just one of their claycourt encounters and that was their first career meeting in 2004 when Nadal was just 16.

Nadal will take a 19-4 career record over Ferrer into the final with 16 of those wins coming on clay. Ferrer's only win over Nadal on the surface was back in 2004 at Stuttgart, the pair's first meeting when the seven-time French Open champion was just 16.

The Bryans still remember from a decade ago when they could afford to stay in Paris in what was practically only a hole in a wall. When they won the Australian Open this year, they broke a tie for most doubles majors with Australian greats John Newcombe and Tony Roche.

No-one can stop Serena 'in that spirit', says coach

Twelve months ago, Williams suffered her worst defeat at a Grand Slam when she was knocked out of the first round in Paris. But, one year on, the 31-year-old has become the oldest women's champion at the French Open in the Open era, having also captured the Wimbledon and US Open crowns.

IPL 2020, CSK vs MI: "Have To Smile Even When Hurting," Says MS Dhoni After 10-Wicket Loss To Mumbai Indians