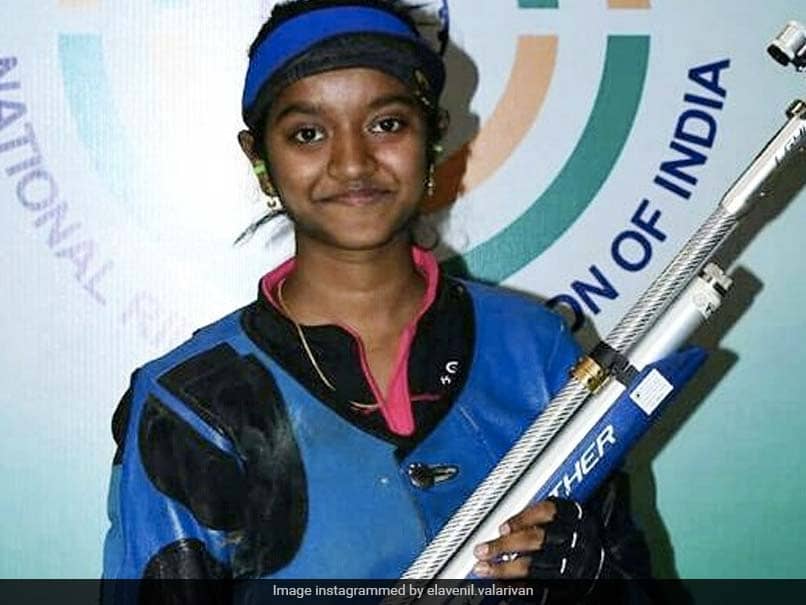 Elavenil Valarivan is the world no.1 in Women's 10m air rifle.© Instagram

World number one in women's 10m air rifle, Elavenil Valarivan, and world number two in men's 10m air pistol, Saurabh Chaudhary, put up a strong show in the European Shooting Championship in Croatia's Osijek on Monday. As many as 10 members of the 13-strong Indian Olympic-bound rifle and pistol shooting squad got their first taste of competition during their ongoing training-cum-competition tour of Croatia. Shooting in the MQS (Minimum Qualification Score) section, the sensational Chaudhary shot more than the tournament proper's topper in the men's 10m air pistol event.

World Cup and Asian Games gold medallist Chaudhary shot 589 to top the chart in his event's MQS, while compatriot Abhishek Verma was fourth with 579.

The Tokyo-bound Chaudhary was way ahead of Ukraine's Oleh Omelchuk, who topped the main qualification with 586.

Both Chaudhary, a Youth Olympic gold medallist, and his equally talented compatriot Verma, will be headed for Tokyo after their training-cum-competition stint in Croatia.

In the women's 10m air rifle, Elavenil shot 630.4 to finish on top ahead of Iranians Armina Sadeghian (629.8) and Fatemeh Karamzadeh (628.7). Elavenil's score would have seen her make the finals in second place, behind world number two and New Delhi World Cup gold medallist Ziva Dvorsak of Slovenia.

Apurvi Chandela was fourth with 627.8, while Anjum Moudgil was seventh with 624.7.

Dvorsak topped the main women's 10m air rifle qualification with 630.8 and she was followed by Norway's Jeanette Hegg Duestad (630.6) and Italian Sofia Ceccarello (630.2).

"Dusting off from Delhi WC score .. training in Hyderabad with @gagunnarang has been productive with a 630.4 .. in Euro Champs," Elavenil tweeted after her event.

In the women's 10m air pistol, world number one and two Yashaswini Singh Deswal and Manu Bhaker shot scores of 572 and 573 respectively. They have shot much better earlier and the pair would have missed Monday's final as well, given the 10th place in regulars logged 574.

It was a high-class field, nonetheless, with reigning Olympic and world champion Anna Korakaki shooting the same score as Bhaker to finish 13th and outside the finals spots.

The talented Divyansh Singh Panwar (628.10) was second in the men's 10m air rifle qualification. The other Indians -- Deepak Kumar (627.4) and Aishwary Pratap Singh Tomar (625.0) -- were third and fifth, respectively, in the event.

China's Lihao Sheng finished ahead of Divyansh, with 630.5.

Russia's Vladimir Maslennikov topped the main qualification with 631.8, with 627.1 being the cut.

Sharing her thoughts on behalf of the squad, rifle coach Deepali Deshpande said, "This competition is the best possible start for our final preparations for Tokyo. Though this competition is non consequential in terms of medals, its a very good competition exposure for the team.

"Everyone looked good today. At the Delhi World Cup itself all except Apurvi looked ready technically. Today our focus was Apurvi and thankfully she is back on track. Even Deepak Kumar after COVID recovery and surgery, looks good. Some more training and they will be ready."

Participating in the continental tournament as guest invitee, the Indians only shot in the MQS section, and hence, their scores were not considered for medals.

India's 13-member Olympic-bound squad arrived in Osijek from Croatian capital Zagreb on Saturday, which is the team's training base in the run-up to the Olympics.

The Indian shooters are taking part in the men's and women's individual Olympic events only.

A total of 15 Indian shooters have qualified for the upcoming Tokyo Olympic Games.

Skeet shooters Mairaj Khan and Angad Bajwa, who have also qualified for the Games, are training in Italy.