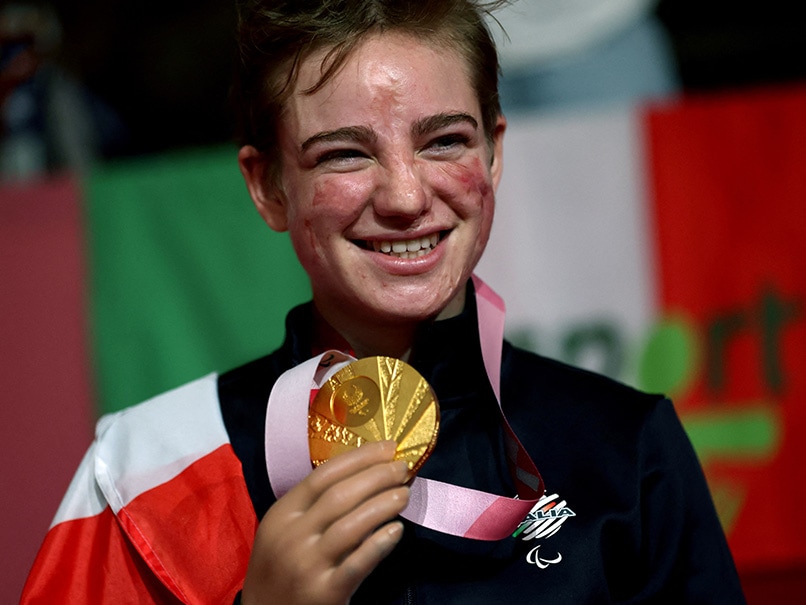 Fencing icon Beatrice "Bebe" Vio successfully defended her women's Paralympic gold on Saturday as Afghanistan's two athletes arrived in Tokyo to compete in the Games. Vio, one of the world's best-known Paralympians, was in unstoppable form as she defeated China's Zhou Jingjing 15-9 in the Women's Individual Foil Category B gold medal match, just as she had done in Rio five years ago. The 24-year-old Italian, who had both forearms and legs amputated when she contracted meningitis as an 11-year-old, screamed in joy before bursting into tears in the arms of her coach after the winning point was scored.

On day four of the competition, a total of 54 gold medals were up for grabs across nine different sports, including 17 athletics finals at the Olympic Stadium.

The number of teams taking part rose to 163 as the International Paralympic Committee said Afghanistan's Zakia Khudadadi and Hossain Rasouli had arrived safely in the athletes' village.

Khudadadi and Rasouli were evacuated last weekend to France as the Taliban took control of their country, it said.

"They will compete next week in taekwondo and athletics, and are "sending out a strong message of hope", IPC chief Andrew Parsons said.

US wheelchair racing legend Tatyana McFadden won her 18th Paralympic medal -- taking bronze in the women's T54 5,000m to extend her streak of finishing on the podium in every Paralympic race she has entered since 2008.

But she said just competing in Tokyo was a victory in itself, having been diagnosed with a blood-clotting disorder in 2017 that required an almost two-year recovery period.

"I'm on cloud nine," said the 32-year-old, who was born in Russia and raised in an orphanage until she was adopted at the age of six.

"I was in a really dark spot because it took me 20 months to recover, and everyone was getting better in those 20 months," she added.

McFadden added that it was "quite amazing" that she took the bronze behind US teammate Susannah Scaroni, who won gold.

Le Fur, a three-time Paralympic gold medallist, said she would retire after the competition.

"The time has come to finish it here in Tokyo," said the 32-year-old.

"I'm proud to do so with this performance and with these extraordinary girls. There are no regrets," she added.

Spain's Susana Rodriguez, who helped fight the coronavirus in her job as a doctor, won gold in the women's PTVI triathlon.

Rodriguez, who fitted hours training for the Paralympics in between helping patients recover from the most severe infections, will also compete in the 1,500m at the Olympic Stadium on Sunday.

"I will try to relax now and try to recover my legs," she said.

"I need to keep calm because this situation gave me a lot of adrenaline," she added.

Britain's Kadeena Cox will also turn her attention to athletics after winning her second cycling gold in the team sprint. She will try to defend her T38 400m title next week.

Also at the velodrome, husband and wife Neil and Lora Fachie of Britain won gold within 15 minutes of each other.

The boccia competition got underway with all four individual gold medallists from the Rio Games returning to defend their titles.

Hong Kong's BC4 champion Leung Yuk-wing will try to repeat his Athens 2004 feat of winning gold in individual and pairs events.

"I am trying to be relaxed to face the game because just thinking about being the champion or the gold medal would be a lot of pressure," he said.

Away from the competition, organisers apologised after a visually impaired Japanese judoka was hit by a self-driving bus in the Paralympic village on Thursday.

Tokyo 2020 suspended the operation of the vehicles after the accident, where one of the buses "made contact" with Aramitsu Kitazono.

Kitazono was scheduled to compete in the men's -81kg competition on Saturday, but did not start his match against Ukraine's Dmytro Solovey.