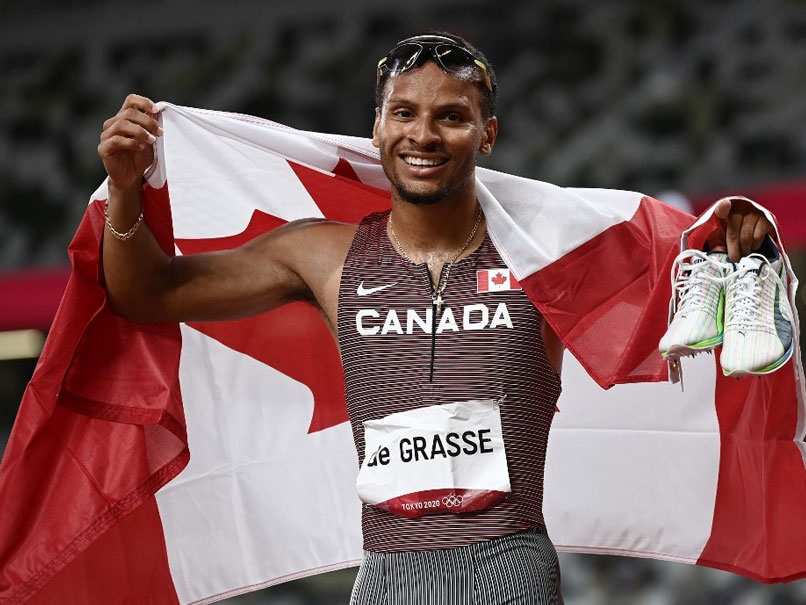 Andre de Grasse upstaged Noah Lyles to claim the first men's 200m gold of the post-Usain Bolt era on Wednesday, as Sydney McLaughlin obliterated her own world record to claim a thrilling victory in the women's 400m hurdles. The stage for the 200m final at Tokyo's Olympic Stadium had been set up by McLaughlin's epic duel with American teammate Dalilah Muhammad. McLaughlin, 21, surged past Muhammad just metres from the line in a baking hot morning session to win in 51.46sec, slicing a whopping 0.44sec off her previous mark of 51.90sec set at the US trials in June.

"It's just iron sharpening iron," McLaughlin said. "You need somebody who's going to push you to your best and that's what we do so well.

"Every time we step on the track it's always something fast."

De Grasse had set the fastest qualifying time for the 200m, an event recently dominated by Jamaican sprint legend Bolt, who had won golds in Beijing, London and Rio between 2008-16.

And the 26-year-old Canadian finally came good on the promise he has shown on the track, having won 200m silver and 100m bronze in Rio before laying out his store in Tokyo with a second bronze in Sunday's blue riband track event.

De Grasse was fast out of his blocks and drove through to the line, clocking a national record of 19.62 seconds for gold.

American Lyles, long touted as Bolt's most likely successor, had to be happy with bronze in 19.74sec as teammate Kenny Bednarek claimed silver in a personal best of 19.68sec.

Emmanuel Korir ensured Kenya's grip on the men's 800 metres continued by leading Ferguson Rotich home for a 1-2 finish for the east African powerhouses.

There was glory, and another bronze, for Poland in the men's hammer as Wojciech Nowicki's best of 82.52 metres secured gold.

Elsewhere on the track, there was a first ever Olympic gold for an Ugandan woman as Peruth Chemutai outstripped the field to win the 3000m steeplechase.

"After my fifth place at the world championships in Doha, I knew a medal would be possible if I run a good race," said Chemutai.

Dutch runner Sifan Hassan's bid for an unprecedented Olympic distance treble remains on course after she eased into Friday's 1500 metres final by winning her semi-final.

The newly-crowned 5000m Olympic champion -- who also has the 10,000m in her sights -- will face a challenge to make it two out of two titles as Kenya's defending champion Faith Kipyegon awaits her.

There was drama in the heptathlon as British world champion Katarina Johnson-Thompson pulled up with a right calf injury in the final event of the first day, the 200m.

It left reigning Olympic champion Nafi Thiam of Belgium, third overnight, in prime position to defend her title in Thursday's second day of competition which features the long jump, javelin and the 800m.

Canada's Damian Warner was in pole in the men's decathlon, with fancied French rival Kevin Mayer, the world record holder, in fifth.

Australian Ashley Moloney sat second on 4,641pts, with Canadian Pierce Lepage third on 4,641 and Mayer still in the hunt on 4,340 ahead of a second day of action featuring the 110m hurdles, discus, pole vault, javelin and 1500m.