Tokyo Olympics: Kevin Durant praised the USA men's basketball team for their win against France (87-82) which helped them secure a fourth straight Olympic gold medal in the sport. 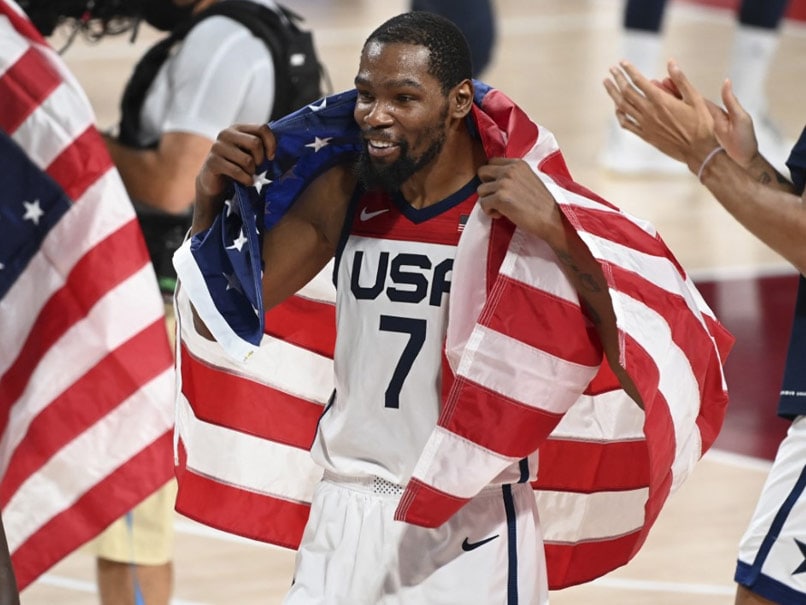 NBA All-Star Kevin Durant hailed his team for overcoming adversity Saturday after pouring in a game-high 29 points to lead the United States past France 87-82 for a "beautiful" fourth straight Olympic men's basketball gold medal. The Americans started slowly but earned a 22-18 lead after the first quarter and were 44-39 ahead at halfway, then survived some nervous late moments to prove the doubters wrong. Gregg Popovich's men had headed to Tokyo after defeats to Nigeria and Australia in lead-up exhibition matches, sparking questions around their global dominance.

They then crashed to seventh-ranked France in their opening group game, their first defeat at an Olympics since the 2004 edition in Athens.

But spearheaded by Durant, they steadied the ship and began gelling, with a French team led by NBA stars Rudy Gobert, Evan Fournier and Nicolas Batum unable to repeat their feat in the final.

Durant was once again the US backbone as he joined Carmelo Anthony as a three-time title-winner, after being part of the triumphant teams in 2012 and 2016.

He had already reinforced his stature by surpassing his fellow great during group play to become their all-time leading Olympic points-scorer.

"This one feels good because we went through a lot," said the 32-year-old, who is poised to sign a four-year, $198 million contract extension with the Brooklyn Nets, according to his manager.

"We had a lot of first-time guys on the team, new experience for everyone on the team, Covid, the kind of bubble we were in, no fans, no-one expecting us to lose," he added.

Durant scored an eye-popping 30 points in each of his last two gold-medal games, and nearly matched that again, proving how crucial he is in pacing their offense.

He ended with three assists and six rebounds while Boston Celtic guard Jayson Tatum racked up 19 points and seven rebounds. Utah Jazz centre Gobert and the Celtics' Fournier both sank 16 points to lead the way for France.

"Our goal was to push them as far as possible in this game. Unfortunately we did a couple of mistakes at the end of the third quarter and beginning of the fourth quarter," said French coach Vincent Collet.

"We were turning it over a few times because we changed the way we played a little bit," Collet added.

"We were insisting a lot on the inside game and suddenly we started dribbling the ball and driving to find the kick. We did it two or three times well, but you know there will be some turnovers and against USA, that is what hurt us the most and denied us," Collet said.

It was the eighth meeting between the two teams at an Olympics and their third final after London in 1948 and at Sydney 2000, with the US winning on both occasions. The Americans have now accumulated a whopping 16 gold medals.

France led 10-4 with five minutes left of the first quarter with the Americans shooting just 2-of-11 from the floor, including 0-of-8 from outside the arc, before they finally found some rhythm and clicked into gear.

Khris Middleton drained a crucial three-pointer to draw them level and three successful free throws from Durant gave them the lead for the first time as they ended the quarter with a 22-18 advantage.

Durant contributed 21 points in the first half which ended with the US 44-39 ahead, but France did well to rally after falling 13 points adrift at one stage with Gobert instrumental with his 13 points.

They closed to within two points early in the third quarter but whenever they tried to make something happen offensively, Durant or Jrue Holiday hit back straight away.

The US went into the final stretch 71-63 in front and hung on as France threw everything they had at them.

Comments
Topics mentioned in this article
Olympics 2020 Olympics Basketball
Get the latest updates on ICC Women's Cricket World Cup 2022 and IPL 2022, check out the Schedule , Live Score and IPL Points Table. Like us on Facebook or follow us on Twitter for more sports updates. You can also download the NDTV Cricket app for Android or iOS.