Tokyo Games: The Indian shooting contingent have already arrived at the Olympics Village on the Harumi waterfront district. They will undergo their first training session on Monday. 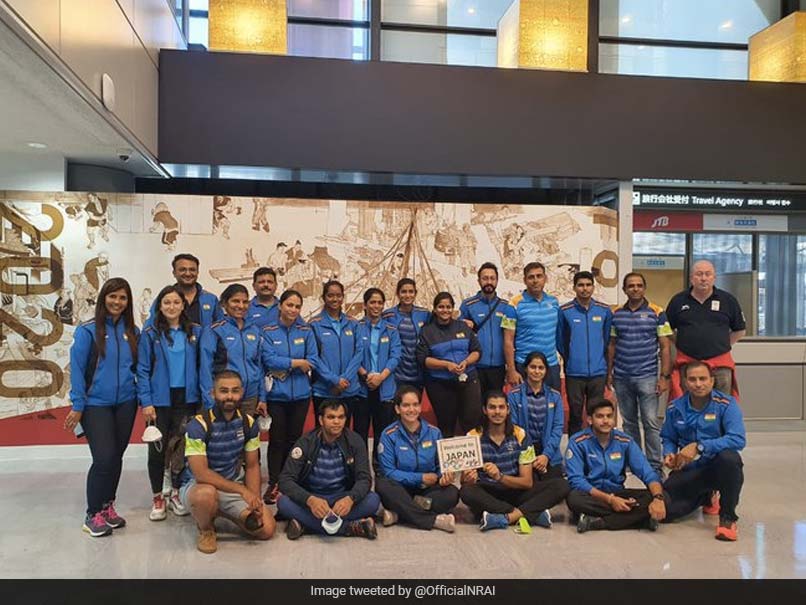 Tokyo Games: The Indian shooting contingent poses for a photo after arriving at Tokyo.© Twitter

The Indian shooters are looking forward to their first training session ahead of the upcoming Olympics, having recovered from jet-lag after a long flight from Europe. The National Rifle Association of India (NRAI) said the shooting contingent, including 15 athletes, has "settled down well" after their arrival at the Games village on the Harumi waterfront district. "The rifle team has booked a bus for 6.55 am in the morning to go for practice," said senior rifle shooter Sanjeev Rajput, who will be appearing in his third Olympics.

"It's time to go check out the range," he added.

They will undergo their first training session on Monday at the Asaka Shooting range.

"The team has settled down well in the village. The atmosphere is good and we are enjoying some much-needed rest after a long journey. We look forward to beginning training from Monday," said national rifle coach Deepali Deshpande.

The athletes and seven support staff have all been accorded twin-sharing rooms and spent the day exploring the village, collecting their gifts, visiting selfie-points and welcoming their compatriots from other sports, besides catching up on much-needed rest.

The shooters also said that arrangements for food and everything else were excellent and besides compulsory wearing of masks, there was no restrictions on movement inside the village for any athlete.

Pistol coach Ronak Pandit said, "Everything is being well taken care of. The food and other facilities are good and we are feeling quite safe with the protocols in place. The Indian government and IOA (Indian Olympic Committee) are all at hand for any issues."

Among the gifts, the athletes received phones, footwear and ear-buds. The Olympics are scheduled to be held from July 23 to August 8, with the shooting events starting a day after the opening ceremony and covering the first 10 days of the extravaganza, which will be held without spectators owing to the COVID-19 pandemic.

Comments
Topics mentioned in this article
Shooting Olympics 2020 Olympics
Get the latest updates on IPL 2021, check out the IPL 2021 Schedule and Indian Premier League Live Score . Like us on Facebook or follow us on Twitter for more sports updates. You can also download the NDTV Cricket app for Android or iOS.