During a felicitation ceremony, Sports Minister Anurag Thakur revealed that he hoped javelin throw would become as popular as cricket in India. 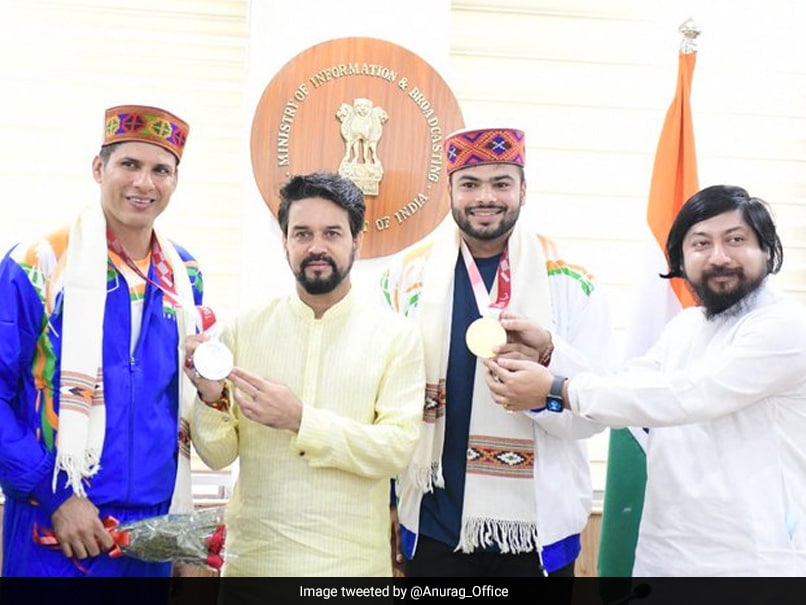 Sports Minister Anurag Thakur on Friday felicitated the just-returned Paralympic medallists of the country, including javelin throwers Sumit Antil and Devendra Jhajharia, hoping the sport will become popular like cricket in years to come. Close on the heels of Neeraj Kumar's historic javelin gold medal in the Tokyo Olympics, Antil, Jhajharia and Sunder Singh Gurjar brought more laurels to the country with their medals in javelin at the ongoing Paralympic Games in Tokyo. Debutant Antil smashed his own world record multiple times for the F64 class gold, while veteran Jhajharia and Gurjar won silver and bronze medals respectively in the F46 category last Monday.

"I hope javelin in India will now become as famous as a cricket bat," Thakur, a former BCCI president, said during felicitation.

Thakur promised all possible support to the country's athletes from the Narendra Modi-led central government.

"On National Sports Day, India clinched four medals and there can't be a better tribute than this to Major Dhyan Chand ji. There is a lot of hard work by the athletes combined with the support given by the government to the National Sports Federations and athletes. Prime Minister Shri Narendra Modi ji's encouragement has been a driving force," the minister said.

"Government will improve the sports ecosystem in the country and through schemes like TOPS, it will keep supporting the athletes (both core and development) in an unprecedented way," Thakur said.

Jhajharia and Kumar thanked the government for the support they received in their Paralympic Games campaign.

"In the last four years, the government has supported us in a great way. PM Modi ji's interaction with us also boosted our morale and we felt motivated this time," Jhajharia said.

Kumar added, "This was a very difficult Paralympics because we did not know whether Games would happen or not. We are very happy that the government adopted us and offered us great support through the Target Olympic Podium Scheme.

"The government is working tirelessly to support us and all our sports-centric and reasonable requests are being approved quickly."

Comments
Topics mentioned in this article
Olympics 2020 Olympics India Athletics
Get the latest updates on ICC Women's Cricket World Cup 2022 and IPL 2022, check out the Schedule , Live Score and IPL Points Table. Like us on Facebook or follow us on Twitter for more sports updates. You can also download the NDTV Cricket app for Android or iOS.