Thaddeus Young scored 17 points, Nikola Vucevic had 12 and the 76ers beat the Toronto Raptors 93-75 on Wednesday, an important victory in their chase of a playoff berth. 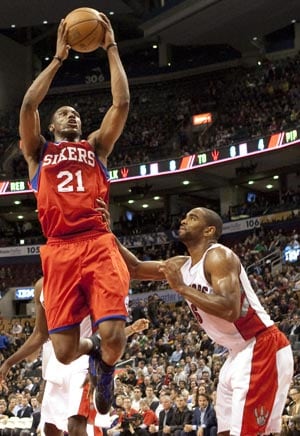 Thaddeus Young scored 17 points, Nikola Vucevic had 12 and the 76ers beat the Toronto Raptors 93-75 on Wednesday, an important victory in their chase of a playoff berth.

Before sending his team out on the floor, Collins asked Williams to share his special, simple message of unity.

"It was something that I came up with last year," Williams explained. "I was just saying it when guys made a big shot or something, I would say 'Show some love' to them and it kind of snowballed from there."

Collins hadn't heard it in a while and noticed the sentiment missing from his team's play, so he decided it was time to reinforce the message

"Tonight, for the first time in a long time, we did the 'Show your love,'" Collins said. "That, to me, is when we start getting the spirit back of who we are. And when we play with that kind of energy and spirit, we're a damn good team."

Elton Brand scored 11 points and Andre Iguodala, Spencer Hawes and Louis Williams each had 10 as the 76ers avenged a 21-point home loss to Toronto last Wednesday, a game in which the Raptors held the Sixers to 22 points in the second half, and just seven points in the fourth quarter.

This time, the 76ers blew the game open in the fourth, outscoring Toronto 30-18 and coasting to victory thanks to an 11-0 run. The Raptors went scoreless for 4:16 late in the game.

"When we were winning, it was a joy to play this game," Brand said. "We're trying to get back to that level.

"The world was falling on us when we lost four in a row," he added. "Now we win two, we're right back to feeling good about ourselves."

Jrue Holliday had eight points, seven assists and seven rebounds for the Sixers, who won back-to-back games for the first time since a three-game streak from March 7 to 11 and strengthened their hold on seventh place in the East.

Just as he did in Tuesday's win at New Jersey, Collins held Hawes and Evan Turner out of the starting lineup, replacing them with Vucevic and Jodie Meeks.

Toronto coach Dwane Casey was upset that his team was outscored 58-20 on points in the paint.

"The paint game really hurt us," Casey said. "We just didn't have any resistance."

The Raptors were without leading scorer Andrea Bargnani, who remains sidelined with a strained left calf, for a second straight game. It's the same injury that forced Bargnani to miss 27 games earlier this season.

Tied at 20 after one quarter, Philadelphia got six points from Williams and five from Young in the second to open a 42-37 lead at the half.

The 76ers pulled farther away with a 9-0 run to start the third, taking a 51-37 lead with 9:24 left. But Anderson led the Raptors back, scoring eight points as Toronto cut the gap to 63-57 heading to the fourth.

One week after Jose Calderon caught an accidental elbow from Brand in Toronto's win at Philadelphia, the Spanish guard was smacked in the right eye again in this one, forced to the locker room for three stitches after a collision with Holliday in the third. Calderon returned to the bench in the fourth but did not re-enter the game.

"He's going to look like Rocky whether he wants to or not," Casey said.

Collins considered Calderon's departure a lucky break for his team.

"I call (Calderon) the head of the snake," Collins said. "He's the guy that makes it go. When he went out, obviously, it was a huge advantage for us."

Philadelphia lost Young early in the fourth when he was accidentally poked in the eye by Davis as they battled for a rebound under the Toronto basket. Young returned to the game after receiving treatment.

Toronto forward Linas Kleiza left the game at halftime with a sore right knee and did not return.

Comments
Topics mentioned in this article
NBA Philadelphia 76ers Toronto Raptors Charlotte Bobcats Chicago Bulls Atlanta Hawks Spencer Hawes
Get the latest Cricket news, check out the India cricket schedule, Cricket live score . Like us on Facebook or follow us on Twitter for more sports updates. You can also download the NDTV Cricket app for Android or iOS.