A struggling and bickering Miami Heat squad lacking injured Chris Bosh fell behind the Indiana Pacers in their second-round NBA playoff series with a woeful 94-75 loss on Thursday. 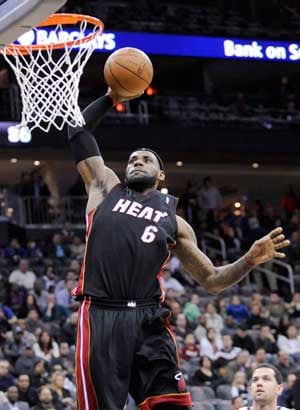 A struggling and bickering Miami Heat squad lacking injured Chris Bosh fell behind the Indiana Pacers in their second-round NBA playoff series with a woeful 94-75 loss on Thursday.

Indiana's George Hill scored 20 points while Roy Hibbert added 19 points and 18 rebounds for the Pacers, who seized a 2-1 lead in the best-of-seven Eastern Conference second-round series with game four set for Sunday at Indianapolis.

"It's must-win, honestly, for us," Heat star LeBron James said. "If we come here and split, go home, we will feel good about ourselves."

Miami star Dwyane Wade scored only five points on 2-of-13 shooting from the field and made a game-high five turnovers, a lackluster effort James vowed will not be repeated in game four.

"I'm not too much worried about it," James said. "He wasn't himself. He wants to play better. He's one of the best players in this world. You have a game like that, you try to throw it away and move on to the next one.

"He will be better in game four."

Wade also exchanged heated words with Spoelstra at one stage and teammates at other times.

"That happens," Spoelstra said. "That was during a very emotional part of the game. We were getting our butt kicked. Those exchanges happen all the time during an NBA season."

They seldom come during the playoffs, however, and Spoelstra added to the mystery when asked what Wade said to him, saying, "That's irrelevant."

"There will be times guys say something, you don't like it, you get over it," Spoelstra said. "Dwyane and I have been together for a long time. That really is nothing. That type of fire, that's the least of our concerns.

"I have to do a better job of getting him in places where he can be effective. I've seen him bounce back from storylines like this and have great games and this is a long series."

It might not be so long a series unless the Heat can find a way to beat the Pacers without star forward Bosh, who suffered a strained abdominal muscle last Sunday in Miami's game one victory.

"If he's not playing, I have the same mindset -- try to block the shot or get the rebound and get the ball to the offensive end," Hibbert said.

With the game level 43-43 at half-time, the Pacers outscored Miami 26-12 in the third quarter to seize command and closed the lopsided rout with a solid fourth quarter.

"We came out with a flat, very inefficient third quarter and it snowballed from there," Spoelstra said. "We have to get ourselves together. We understand that. We have veteran guys.

"They are defending very well. We have to do some things differently. We have had some open shots. We have to knock down a few more of those. But it's one game and we will get over it and get ready for Sunday."

Comments
Topics mentioned in this article
NBA Indiana Pacers Miami Heat
Get the latest Cricket news, check out the India cricket schedule, Cricket live score . Like us on Facebook or follow us on Twitter for more sports updates. You can also download the NDTV Cricket app for Android or iOS.