When Dwight Howard asked to be fired

Orlando Magic coach Stan Van Gundy said on Thursday he has been told by high-ranking team officials that star center Dwight Howard has previously asked that he be fired. 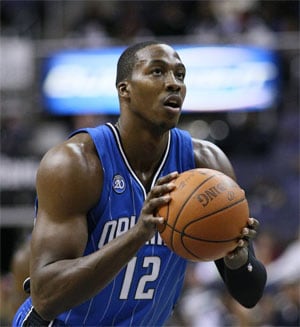 Orlando Magic coach Stan Van Gundy said on Thursday he has been told by high-ranking team officials that star center Dwight Howard has previously asked that he be fired.

"I know he has," Van Gundy told reporters after the team's morning shootaround ahead of Thursday night's matchup with the New York Knicks. "That's just the way it is. Again, I've been dealing with that all year. It's not anything real bothersome. You go out and do your job."

The stay-or-go drama surrounding Howard has haunted the Magic all season. After securing Howard's services for at least another season at the trade deadline last month, Thursday brought the latest wrinkle to the saga.

Howard has denied reports that he has asked for Van Gundy's dismissal. He again denied it Thursday.

"Whatever happens at the end of the season is not under my control," Howard told reporters. "I am a player for the Magic. I am not the GM. I am not (owner) Rich DeVos I am not (Magic CEO) Alex Martins. So that's not my job. So you guys should stop ... every other week ... trying to find something, because there's nothing.

"I haven't said anything to anybody about anything. Our main concern is winning. So all the other stuff should stop."

Asked how he was sure of a report that has been circulated and repeatedly denied by Howard and other team officials throughout the season, the 52-year-old Van Gundy said he had been told by "people right in our management, right from the top."

Howard was in the locker room before the game, but didn't address the issue any further.

Magic reserve guard Ish Smith said he didn't hear about the morning's comments by Van Gundy until he arrived in the locker room to get dressed for the game. He said he doesn't think any internal issues have played into the Magic's recent losses.

"My mom loves soap operas, so for me to be a part of one is pretty special," Smith joked. "From the outside I think it looks like (a soap opera), but when you're on the inside I think it's no effect on us. I think defensively the last three or four games has been what's been hurting us. I don't think anything off the court is causing us to lose these games."

The whole episode was a definite change in approach by Van Gundy, who is usually mum when it comes to issues dealing with his job status.

The day before the trade deadline last month, Van Gundy himself sidestepped questions about reports that Howard had asked management to jettison both himself and general manager Otis Smith as a condition for him signing a long-term contract extension.

"If they want to fire me to please somebody, fire me," Van Gundy said at the time.

Van Gundy's current contract runs through the end of the season. He has guided the Magic to at least 50 wins in each of his four previous seasons and led Orlando to the NBA Finals in 2009.

Howard and Van Gundy have seemingly always been on cordial terms, though he's sometimes been critical of Van Gundy's direct and vocal coaching style, which he has previously said can be counterproductive to team morale.

Smith and Van Gundy met during the offseason. The coach left the meeting pledging to tone down some of his intensity during games with both officials and players. So far this season he has yet to receive a technical foul.

Asked this week to address the status of Van Gundy and Smith, Martins said only that both he and Smith will undergo end-of-the-season evaluations, as do all Magic employees.

Comments
Topics mentioned in this article
Orlando Magic Dwight Howard NBA
Get the latest Cricket news, check out the India cricket schedule, Cricket live score . Like us on Facebook or follow us on Twitter for more sports updates. You can also download the NDTV Cricket app for Android or iOS.