Russell Westbrook scored 26 points and the Thunder won their second straight, beating the Bucks 109-89 on Monday in a game that featured seven technical fouls, an ejection of Bucks backup forward Larry Sanders and a confrontation between Mike Dunleavy and Serge Ibaka. 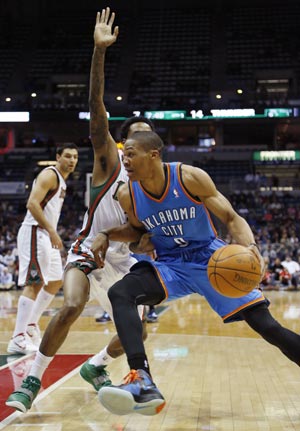 Russell Westbrook scored 26 points and the Thunder won their second straight, beating the Bucks 109-89 on Monday in a game that featured seven technical fouls, an ejection of Bucks backup forward Larry Sanders and a confrontation between Mike Dunleavy and Serge Ibaka.

Sanders was ejected after earning a pair of technicals in the second half, while Dunleavy, Brandon Jennings and coach Scott Skiles also were assessed technicals for Milwaukee.

Did all those technicals frustrate the Bucks?

"A little bit," Westbrook said. "It just showed we did our job as a team and came out and got a win."

Kevin Durant added 19 for the Thunder, who broke a three-game losing streak with a victory over Toronto on Sunday. Oklahoma City moved back ahead of San Antonio by percentage points for the No. 1 seed in the Western Conference.

"It reaffirmed we are definitely a top-tier team in this league," Westbrook said.

Ibaka and Nazr Mohammed also were called for technicals.

Ersan Ilyasova scored 18 for the Bucks, who fell 1 1/2 games out of the No. 8 playoff spot and face the New York Knicks at home Wednesday in a game that could prove critical to the Bucks' playoff hopes.

"If you get too far from reality, things can go bad for you," Skiles said. "The reality is, that (Thunder) team's at a different level than we are. And we're trying to get to that level someday."

The Bucks were called for five technicals in a game for the first time since a Dec. 31, 2001, game at Chicago, although Skiles and Dunleavy both said afterward that they hoped to get theirs rescinded by the league.

"I didn't use any profanity, I didn't do anything except I said, 'Let's go, Kane,' and I got a technical," Skiles said, referring to official Kane Fitzgerald. "We talked about it later."

When asked if the Bucks still are fighting to earn the respect of referees, Jennings answered cautiously.

"You can't really talk too much about the refs, because you know what will happen, we'll get fined for that," Jennings said. "The main thing is, we're just trying to play hard every night. We play just as hard as everybody else."

It was a rough night for Monta Ellis, who scored nine points on 3-for-12 shooting.

The Thunder beat the Bucks on the boards, outrebounding them 26-15 in the first half and 44-35 for the game.

"You don't expect to go on Milwaukee's floor and win by 20, but I thought our defensive mindset was outstanding from the start," Thunder coach Scott Brooks said.

Westbrook hit a 3-pointer over Jennings in the first quarter - then paused to pantomime blowing smoke off his fingers and putting them back in holsters like an Old West gunslinger, a more-exaggerated-than-usual version of his celebration gesture.

"It's something I always do," Westbrook said.

Jennings didn't take issue with it, acknowledging that Westbrook was hitting tough shots but also noting that "he still took a lot of shots at the same time."

"All the taunting, it's all right," Jennings said. "It's cool with me."

Then Ibaka and Dunleavy got tangled up after a shot clock violation, with Ibaka standing over Dunleavy and keeping him down as he tried to get up off the floor. The two were separated and both assessed technicals - although Bucks fans booed loudly after a replay of the incident on the stadium video board, judging Ibaka to be the main aggressor.

"I think they saw my reaction to the guy grabbing me, but hopefully they'll understand and take it back," Dunleavy said.

The incidents didn't do much to slow down the Thunder, who led 35-18 going into the second quarter and 61-47 at the half after Westbrook hit a 3-pointer at the buzzer.

With Milwaukee trailing by 12, Westbrook appeared to carry the ball right in front of the bench but it wasn't called. Skiles appeared to complain and received a technical - as did Jennings immediately afterward.

Durant hit both foul shots, Westbrook scored and the Thunder led 82-66 with just over three minutes left in the third quarter.

Sanders also received a technical late in the third quarter after he stormed toward a referee and Jennings tried to hold him back. Oklahoma City closed the quarter on an 11-2 run and led 87-68 going into the fourth.

Sanders then was called for his second technical at the 9:18 mark in the fourth, high-fiving fans as he walked to the locker room.

"I don't think I responded very well, but I think it's just an emotional game," Sanders said.

Comments
Topics mentioned in this article
NBA Mike Dunleavy Russell Westbrook
Get the latest Cricket news, check out the India cricket schedule, Cricket live score . Like us on Facebook or follow us on Twitter for more sports updates. You can also download the NDTV Cricket app for Android or iOS.