Wes Johnson scored 19 points to back Kevin Love's 29 points and 16 rebounds in the Minnesota Timberwolves' 106-94 victory over the Portland Trail Blazers on Wednesday. 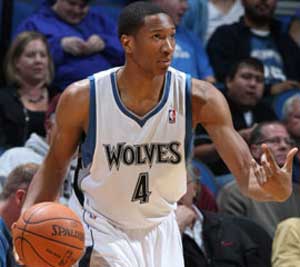 Wes Johnson scored 19 points to back Kevin Love's 29 points and 16 rebounds in the Minnesota Timberwolves' 106-94 victory over the Portland Trail Blazers on Wednesday.

Johnson went 3 of 4 on 3-pointers and Luke Ridnour added 22 points for the Timberwolves (21-19), who moved into the eighth spot in the Western Conference playoff race. They own the tiebreaker over Houston, who lost earlier on Wednesday.

LaMarcus Aldridge scored 22 points and Gerald Wallace had 13 points, nine assists and nine rebounds for the Blazers, who have lost four of their last five games.

Aldridge went 2 for 3 from the free throw line, his first foul shots in four games, but was badly outplayed by Love for the second straight game. He was held to just five points in the second half.

Comments
Topics mentioned in this article
NBA Minnesota Timberwolves Kevin Love
Get the latest Cricket news, check out the India cricket schedule, Cricket live score . Like us on Facebook or follow us on Twitter for more sports updates. You can also download the NDTV Cricket app for Android or iOS.