Wade and Bosh each score 30 as Heat beat Raptors

Dwyane Wade and Chris Bosh scored 30 points each and the Miami Heat beat Toronto 113-101 on Friday , their seventh straight win over the Raptors. 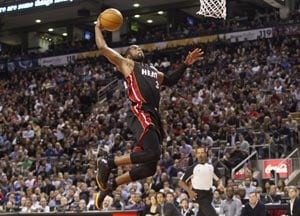 Dwyane Wade and Chris Bosh scored 30 points each and the Miami Heat beat Toronto 113-101 on Friday , their seventh straight win over the Raptors.

Wade dedicated the performance to his nephew, one of 13 men shot,Â  two fatally,Â  during a violent six-hour stretch in his hometown of Chicago on Thursday.

"I played for him and with him in mind," Wade said. "I was 9 years old when he was born, I was an uncle at 9 years old. A lot of thoughts go through your mind.

"My prayers go out to all the families involved," he added. "It's tough. When it's someone in your family, it really hits you hard."

Wade's nephew was one of six men shot outside a South Side convenience store early Thursday evening. The eight-time NBA All-Star did not learn of the shooting until following Miami's home win over Dallas on Thursday. His nephew, who was not identified, was expected to undergo surgery today, but his condition was not made public.

"The biggest thing, the thing you thank God for, is that he's healthy," Wade said.

The shooting comes one week after Wade was one of several Heat players to speak out about the shooting death of Florida teen Trayvon Martin.

LeBron James had 26 points and nine assists and Mario Chalmers added 14 points as the Heat won for the second time in two nights after beating the Mavericks the previous evening in a rematch of last year's finals.

"We came out with a lot of energy and effort," James said. "Toronto made a lot of shots, they kept getting closer but we just tried to continue to wear on them, worked on our habits and we were able to close the game out in the fourth."

Wade scored 13 points in the final quarter while Bosh had 12 against his former team as the Heat pulled away.

"There's a lot of memories, a lot of great memories here," said Bosh, who was booed throughout. "Anytime I come here I don't want to disappoint myself and have a bad game."

DeMar DeRozan scored 28 points and Andrea Bargnani had 27 for Toronto. Amir Johnson had 12 points and 12 rebounds and Jose Calderon had 16 assists, one shy of his season high, but the Raptors lost for the sixth time in eight games.

"It's hard to contain (Miami's) offense," DeRozan said. "They move the ball well and they know what they're looking for. When you have three All Stars on your team it makes it tough to cover all of them."

Miami came in having lost six of eight away from home, but improved to 16-11 away from American Airlines Arena.

"While we weren't necessarily quite as disciplined as we needed to be defensively, our mentality, the mindset and the activity was good," Heat coach Erik Spoelstra said.

A 3-pointer by Toronto's James Johnson tied the score at 89-all with 9 minutes to go, but the Heat answered with an 8-0 run, including five straight free throws by Norris Cole, Wade and Bosh and then a 3 by Wade, to take a 97-89 lead with 5:48 left.

"That was the moment where we kind of pulled away a little bit," Wade said.

Calderon ended Toronto's drought with a jumper but the Heat scored eight of the next 10 points, including back-to-back dunks by Bosh and Wade, to lead 105-93 with 3:39 remaining.

"Our defense in the fourth quarter was not good enough to stop them," Bargnani said.

Miami raced to a 10-0 lead as the Raptors missed their first five field goal attempts, and the Heat were up 20-6 at 6:38 of the first. Toronto responded by outscoring Miami 21-10 the rest of the quarter, cutting it to 31-27 after one.

"They threw a haymaker at us, knocked us down, but I thought we bounced back through," Toronto coach Dwane Casey said.

The Raptors kept it up in the second, and Alan Anderson's steal led to a fast-break layup for DeRozan, giving Toronto its first lead, 41-39, with 6:23 left in the half.

James scored eight points as the Heat reclaimed the advantage, taking a 59-51 lead into the half.

Bargnani scored 14 points in the third quarter and DeRozan added eight, overcoming a 10-point quarter from James, and the Heat needed a 3 by Cole with 12 seconds left to tie it at 83 heading to the fourth.

Comments
Topics mentioned in this article
NBA Toronto Raptors
Get the latest Cricket news, check out the India cricket schedule, Cricket live score . Like us on Facebook or follow us on Twitter for more sports updates. You can also download the NDTV Cricket app for Android or iOS.