San Antonio opened a 3-1/2 game gap atop the Southwest Division with its win over Brooklyn, with Tony Parker scoring 20 points and Tim Duncan adding 15. The Spurs went 9-0 at home in December. 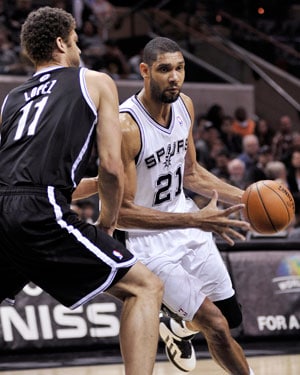 The San Antonio Spurs set a franchise record by holding the Brooklyn Nets to just five points in the third quarter, en route to 104-73 win in the NBA on Monday.

It was the least points the Spurs had ever conceded in a quarter, and ensured the Nets suffered their first loss under interim head coach P.J. Carlesimo.

San Antonio opened a 3-1/2 game gap atop the Southwest Division with its win over Brooklyn, with Tony Parker scoring 20 points and Tim Duncan adding 15. The Spurs went 9-0 at home in December.

MarShon Brooks had a season-high 16 points to lead Brooklyn.

Indiana climbed to the top of the Central Division, a game clear of Chicago and Milwaukee, by beating the Memphis Grizzlies 88-83.

Paul George had 21 points, six rebounds and five assists while D.J. Augustin had 17 points and six assists for the Pacers, who have won five of their past six games.

Zach Randolph had 21 points and 15 rebounds for the Grizzlies, who trailed by 10 points in the second half, hit the lead in the fourth quarter, but could not hang on.

The Houston Rockets had allowed 120 points plus in both their past two games and were coming off a 30-point loss to Oklahoma City, but mustered a little more defense to beat the Atlanta Hawks 123-104.

James Harden had 28 points for Houston, which had a 16-0 run in the second quarter to build a big lead but saw that whittled away to five points in the fourth before steadying with an 8-0 run.

Lou Williams had 21 points for the Hawks, whose winning streak ended at four games.

Kevin Durant scored 30 points and Russell Westbrook returned from a cut above his eye with 24 points, nine assists and seven rebounds. The Thunder won on New Year's Eve for the fifth straight year and ended 2012 on a run of 15 wins from 17 games.

Luis Scola scored 24 points to lead the Suns, who dropped their sixth straight game overall and their seventh in a row against Oklahoma City.

Miami's LeBron James was the key man as the Heat won 112-110 in overtime at the Orlando Magic.

James scored eight points in OT, including two free throws that clinched it with 1.5 seconds remaining. He finished with 36 points, 11 assists and eight rebounds. Chris Bosh scored 22 points for the Heat.

Orlando lost its sixth straight but there was some personal achievement, as Nikola Vucevic had 20 points and set a team record with 29 rebounds, beating the 28 recorded by Shaquille O'Neal in 1993.

In Monday's other game, the Charlotte Bobcats finally ended an 18-game losing skid by beating the Chicago Bulls 91-81.

Comments
Topics mentioned in this article
Tim Duncan Tony Parker DeJuan Blair NBA
Get the latest updates on ICC T20 Worldcup 2022 and CWG 2022 check out the Schedule, Live Score and Medals Tally. Like us on Facebook or follow us on Twitter for more sports updates. You can also download the NDTV Cricket app for Android or iOS.