Randy Foye came off the bench and scored 17 points to lead the Utah Jazz to a 95-86 NBA victory over the star-studded but struggling Los Angeles Lakers on Wednesday. 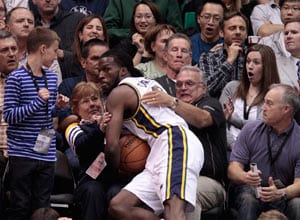 Randy Foye came off the bench and scored 17 points to lead the Utah Jazz to a 95-86 NBA victory over the star-studded but struggling Los Angeles Lakers on Wednesday.

Foye made four three-pointers in the fourth quarter, while Al Jefferson completed a double-double of 18 points and 10 rebounds for Utah, who ended a three-game losing streak.

Lakers superstar Kobe Bryant scored a game-high 29 points and Dwight Howard added 19 points and nine rebounds, but the Lakers were unable to build on their first win of the fledgling season, a 108-79 victory over Detroit on Sunday.

Bryant scored the Lakers' final 14 points, but it wasn't enough for a Lakers team that have lost four of their first five games.

Despite the disappointments, Howard said he and Bryant need to display confidence.

"We have to do a better job keeping our frustrations on the inside and play through it," Howard said.

That's a recipe that seems to suit Bryant, who answered with characteristic swagger when asked if he was worried about the Lakers' season.

While the re-vamped Lakers continued their quest for chemistry, their cross-town rivals the Los Angeles Clippers handed the San Antonio Spurs their first defeat of the season, 106-84.

Jordan scored 20 points with 11 rebounds and Paul poured in 10 points with 12 assists against a Spurs team that swept the Clippers in the second round of last season's playoffs.

Danny Green led San Antonio with 12 points, while Tim Duncan added 10 points and six rebounds for the Spurs, who had opened the season with four straight victories.

Comments
Topics mentioned in this article
C.J. Miles Los Angeles Lakers Utah Jazz Al Jefferson Gordon Hayward Cleveland Cavaliers NBA
Get the latest updates on ICC T20 Worldcup 2022, check out the Schedule and Live Score. Like us on Facebook or follow us on Twitter for more sports updates. You can also download the NDTV Cricket app for Android or iOS.