Utah's Mo Williams sank a 3-pointer on the buzzer to give the Jazz a 99-96 win over San Antonio on Wednesday, ending the Spurs' winning streak at five and stopping the Texan team moving to the top of the NBA standings. 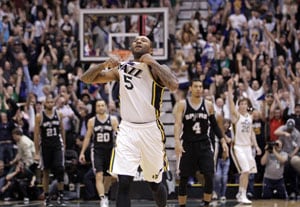 Utah's Mo Williams sank a 3-pointer on the buzzer to give the Jazz a 99-96 win over San Antonio on Wednesday, ending the Spurs' winning streak at five and stopping the Texan team moving to the top of the NBA standings.

The Jazz trailed by eight points with a little more than 4 minutes remaining but fought back for a satisfying win over their recent nemesis. Williams' winning shot was his only 3 of the night and he finished with just eight points on 3-for-9 shooting from the field.

Despite the loss, San Antonio maintained the two-game lead atop the Southwest Division because Memphis also lost, as did the Miami Heat, whose stuttering start to their title defense continued with a defeat at the hands of Golden State.

Tim Duncan and Tony Parker each scored 22 points for the Spurs, who swept the Jazz out of the playoffs last season and had won 11 of the previous 12 meetings.

Miami suffered a similarly narrow defeat, as Golden State's Draymond Green made a layup with nine tenths of a second left to give the Warriors a 97-95 win.

Klay Thompson tied a season high with 27 points to lead the Warriors, who have won five straight.

LeBron James led Miami with 31 points, reaching the 20-point mark for the 25th consecutive game - the longest current streak in the NBA. He had a chance to square the game after Green's basket but missed a baseline jumper, sending Miami to only its second loss in 12 home games.

The Chicago Bulls stayed atop the Central Division with a 96-89 win over the Philadelphia 76ers; their four straight road win.

Joakim Noah scored 21 points, and Luol Deng added 19 points and 12 rebounds for the Bulls, while Jrue Holliday led the Sixers with 26 points.

San Antonio's loss, coupled with Oklahoma City's surprisingly tight 92-88 win over the lowly New Orleans Hornets, left the Thunder with the best record in the NBA at 18-4 - the same record they had this time last season.

Kevin Durant scored 35 points for Oklahoma City, which extended its winning streak to nine games; their longest streak since the team relocated from Seattle.

Brian Roberts had 16 points for the Hornets, who looked set to pull off a shock win when they led by 11 points in the second half but could not resist the Thunder's surge, and suffered their fifth straight loss.

The Los Angeles Clippers notched their eighth successive win and remained a game clear atop the Pacific Division after a 100-94 victory over the Charlotte Bobcats. Chris Paul, Blake Griffin and Matt Barnes all had 19 points.

Charlotte's Byron Mullens also had 19 points for the stumbling Bobcats, who have lost nine straight.

The closest game of the day came in Boston, where the Celtics prevailed 117-115 over the Dallas Mavericks after double overtime.

Paul Pierce scored 34 points, including a 3-pointer at the start of the second overtime while Rajon Rondo and Kevin Garnett each had 16 points for Boston. Pierce became the 25th player in NBA history to pass 23,000 points.

The Memphis Grizzlies suffered consecutive defeats for the first time this season when they went down 82-80 at the Phoenix Suns.

Goran Dragic made a short hook shot from the left baseline with 0.5 seconds left. Dragic had 12 points, and Shannon Brown and Jared Dudley scored 15 each for the Suns, who had lost their previous seven games.

Rudy Gay had 21 points and 11 rebounds for the Grizzlies.

It was also tight in Minnesota where the Timberwolves used a big advantage at the free-throw line to edge the Denver Nuggets 108-105.

Nikola Pekovic had 22 points and 11 rebounds for the TWolves, who won despite Kevin Love finishing with only eight points on 3-for-17 shooting. That came on a day he had to explain to the team owner and his teammates some critical comments he made about the franchise.

The Timberwolves shot under 40 percent for much of the game, but made 30 of 37 from the free throw line. The Nuggets were just 14 of 24 at the line.

Kenneth Faried had 26 points and 14 rebounds for the road-weary Nuggets, who missed a 3-point attempt at the buzzer that would have tied the game.

Josh Smith and Jeff Teague scored 16 points apiece for the Hawks, who have won eight straight regular season games against the Magic.

Arron Afflalo scored 16 points for Orlando, which connected on only 31 of 81 shots and committed 16 turnovers which led to 24 points. The Magic have lost four successive home games.

The Milwaukee Bucks moved to an 11-9 record - their best opening 20 games for seven years - with a 98-85 win over the Sacramento Kings. Brandon Jennings scored 19 points, and Monta Ellis had 17 points and 11 assists for the Bucks while Tyreke Evans returned from three games out with a knee injury to lead the Kings with 17 points.

The Brooklyn Nets ended a five-game skid with a 94-88 win at the Toronto Raptors, with Joe Johnson scoring 23 points.

The Indiana Pacers came from 16 points down to beat the Cleveland Cavaliers 96-81, with Paul George finishing on 27 points, while the Houston Rockets downed the Washington Wizards 99-93.

Comments
Topics mentioned in this article
NBA C.J. Miles Los Angeles Lakers Utah Jazz Al Jefferson Gordon Hayward Cleveland Cavaliers
Get the latest updates on ICC T20 Worldcup 2022, check out the Schedule and Live Score. Like us on Facebook or follow us on Twitter for more sports updates. You can also download the NDTV Cricket app for Android or iOS.